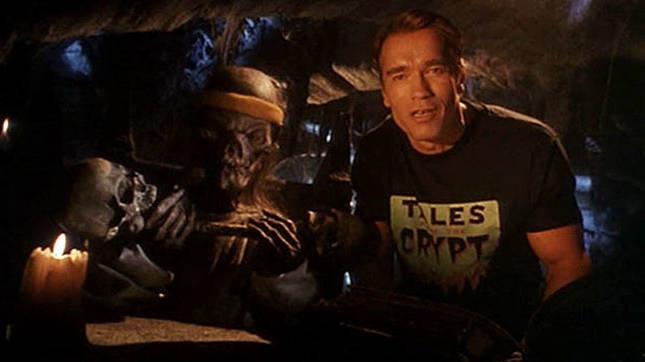 That Time Arnie Directed Tales from the Crypt

As it’s Halloween in a few days I thought I would change it up and look back at an episode of Tales from the Crypt which was directed by none other than one Arnold Schwarzenegger. It isn’t action-based (it is Tales from the Crypt after all) but it’s a fun 30 minutes and watching Arnie interact with the Crypt Keeper is amazing.

I recently bought the entire box set of Tales from the Crypt, so I’ve been making my way through it and I am now on season 2. The episode directed by Arnie is called The Switch and is the second episode of the season.

It tells the story of a wealthy and elderly man who subjects himself to a revolutionary new treatment in order to please his gold-digger girlfriend. Unfortunately becoming young again turns out to be very expensive.

These episodes are rarely scary and Tales from the Crypt stories were usually morality plays and this is no different.

A few of Arnold’s co-stars from other projects make an appearance including the late Kelly Preston (Twins) who plays Linda and Roy Brocksmith (Total Recall) who plays the Doctor. Rick Rossovich who plays Hans was also Matt in The Terminator.

William Hickey is well cast as Carlton Webster the wealthy man who wants to make himself appear younger to the woman he loves. Getting old sucks for everyone so it’s something we can all empathise with but we know early on that Linda is nothing more than a gold digger and Carlton is spending all of this money for no reason.

The episode is on YouTube so you have a spare 30 minutes check it out and enjoy. Happy Halloween!