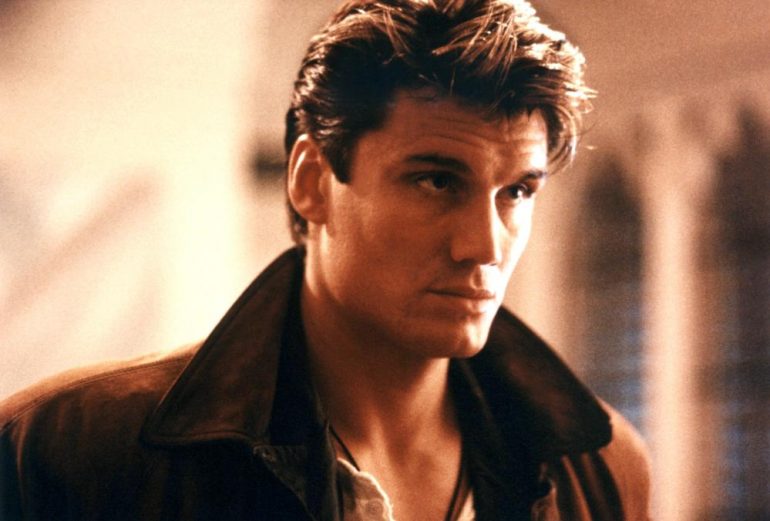 I finally sat down and tallied up all your votes and put together the top 10 for Dolph Lundgren’s best movies; of course the obligatory dickheads voted for Legendary thinking they were being funny (they aren’t) so it will not be on the list at all. Aquaman got a lot of votes too but I figured Dolph isn’t the lead in it so I’m giving it an honourable mention.

The only issue I have with this top 10 is the lack of love for Red Scorpion which would be top 5 for me but otherwise it’s pretty solid. Thanks to all who voted.

So without further ado here are the 10 best Dolph Lundgren movies.

SYNOPSIS: In 1985, Russian boxer Ivan Drago killed former U.S. champion Apollo Creed in a tragic match that stunned the world. Against the wishes of trainer Rocky Balboa, Apollo’s son Adonis Johnson accepts a challenge from Drago’s son — another dangerous fighter. Under guidance from Rocky, Adonis trains for the showdown of his life — a date with destiny that soon becomes his obsession. Now, Johnson and Balboa must confront their shared legacy as the past comes back to haunt each man.

Although not as good as Creed or Rocky IV it’s nice to see Creed II get as much love as it did; it’s an excellent sequel that never loses its heart and we actually start to care about Drago and his relationship to his son.

SYNOPSIS: After his family is murdered, a detective (Dolph Lundgren) tracks the culprit (Ron Perlman) to Thailand and teams up with a Thai agent (Tony Jaa) to bring him to justice and take down his human-trafficking ring.

This was one of Dolph’s most personal projects as it’s a subject that is close to his heart; not only is not an empty action flick but it sheds light on the awful world human trafficking but it still has plenty of awesome fight scenes featuring Tony Jaa and Michael Jai White.

8. Masters of the Universe

SYNOPSIS: When the evil Skeletor (Frank Langella) finds a mysterious power called the Cosmic Key, he becomes nearly invincible. However, courageous warrior He-Man (Dolph Lundgren) locates inventor Gwildor (Billy Barty), who created the Key and has another version of it. During a battle, one of the Keys is transported to Earth, where it is found by teenagers Julie (Courteney Cox) and Kevin (Robert Duncan McNeill). Now both He-Man and Skeletor’s forces arrive on Earth searching for the potent weapon.

I always considered this more of a guilty pleasure rather than a good movie but it’s still a lot of fun and it got plenty of votes too.

SYNOPSIS: Former Russian Special Forces commando Nick Cherenko abandons his violent past when his wife and child are killed by gangsters. However, years later he is hired to retrieve an abducted girl and, discovering that the kidnappers are the same thugs who slaughtered his family, sets out to exact bloody, bullet-ridden revenge.

It was a shock to see this get so many votes but I’m delighted as it’s one of Dolph’s underrated gems with some great action and a cool story.

6. Dark Angel AKA I Come in Peace

SYNOPSIS: Renegade cop Jack Caine (Dolph Lundgren) is intent on snuffing out a dangerous gang of drug traffickers known as the “White Boys.” When the gang makes off with a cache of heroin from federal custody and destroys the building to conceal evidence of their crime, Caine investigates with straight-arrow FBI agent Arwood Smith (Brian Benben). But bizarre new clues reveal that the Boys’ criminal enterprise extends much further than anyone had previously imagined.

I’ve never referred to this movie as Dark Angel as I Come in Peace works so much better; I love everything about this movie from its music to the visual style and of course Matthias Hues.

SYNOPSIS: After reclaiming the boxing championship title, Rocky Balboa (Sylvester Stallone) plans to retire and live with his wife, Adrian (Talia Shire). However, during an exhibition match, Rocky’s friend Apollo Creed (Carl Weathers) is mercilessly beaten to death by hulking Russian newcomer Ivan Drago (Dolph Lundgren). Rocky vows payback against Drago and flies to Russia to train for a Christmas Day fight. Despite their different training methods, Rocky and Drago both wage a long and intense match.

Drago!! Rocky IV is one of the most iconic movies of the 80’s so obviously this was going to get a lot of votes; Dolph is at his evil best with some classic dialogue. If he dies, he dies…

SYNOPSIS; Mercenary Nick (Dolph Lundgren) is hired to perform what he swears will be his final mission. He assembles a team to go to an island in the Pacific to convince the natives, one way or another, to give up their mining rights. Once there, he finds himself charmed by the wisecracking village headman, Po (B.D. Wong), and attracted to single mom Loki (Charlotte Lewis). Nick decides to turn against his corporate bosses, but others opt to stick with the money, and a pitched battle ensues.

Men of War deserves to be high up on the list as it has some quality action scenes and you can never go wrong with Trevor Goddard on villain duties.

SYNOPSIS: Based on the popular Marvel comic book, this film begins with Frank Castle (Dolph Lundgren) as a respected police officer dedicated to eradicating the Mafia’s influence — that is, until the mob responds with a lethal car bomb that decimates Castle’s family. Now, filled with rage and presumed dead from the horrific explosion, Castle takes to the city’s underground sewer tunnels to bring his own brutal brand of vigilante justice to the streets and wreak vengeance on those who killed his family.

Nice to see this getting more love as it was considered a disappointment at the time of release but I think it’s still my favourite Punisher movie.

SYNOPSIS: An American with a Japanese upbringing, Chris Kenner (Dolph Lundgren) is a police officer assigned to the Little Tokyo section of Los Angeles. Kenner is partnered with Johnny Murata (Brandon Lee), a Japanese-American who isn’t in touch with his roots. Despite their differences, both men excel at martial arts, and utilize their formidable skills when they go up against Yoshida (Cary-Hiroyuki Tagawa), a vicious yakuza drug dealer with ties to Kenner’s past.

Showdown in Little Tokyo is a classic buddy movie starring Dolph and the late Brandon Lee and is filled with cheese, homo eroticism, one-liners, nudity and violence so there’s nothing to dislike.

SYNOPSIS: During the Vietnam War, soldier Luc Deveraux (Jean-Claude Van Damme) finds that his superior officer, Andrew Scott (Dolph Lundgren), has turned violently deranged, and the two fight to the death. After their bodies are retrieved, they are placed into a secret program in which they are reanimated and trained to become unquestioning killing machines. While Devereaux and Scott initially have no memory of their former lives, glimpses of their pasts start to return, rekindling their intense conflict.

I’m pleased Uni Sol was voted number 1 as it is arguably my favourite Dolph movie but I’m surprised the other movies in the series got such little love in the votes.

So there we have it; the 10 best Dolph Lundgren movies as voted for by you.