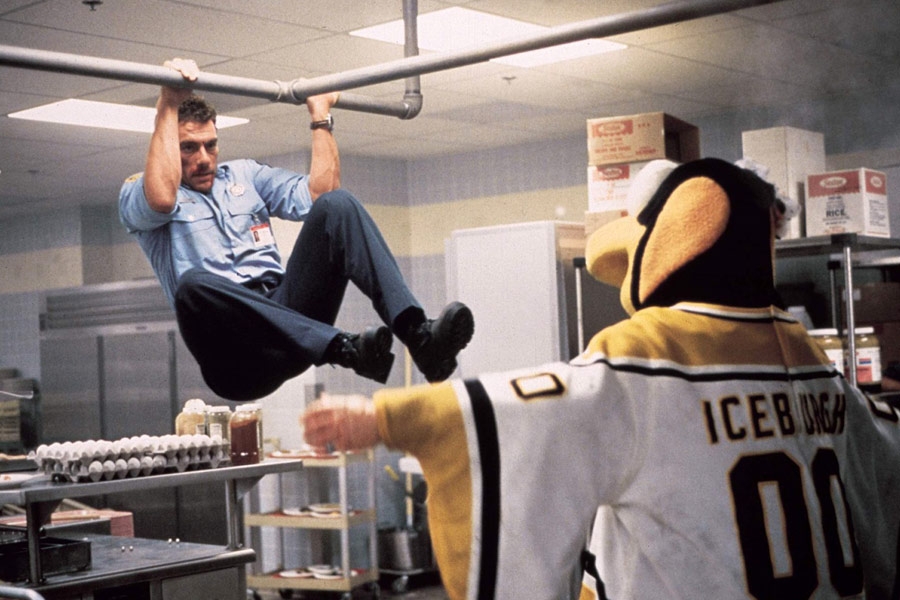 The 10 Best Moments from Sudden Death

With the news of the upcoming remake/sequel starring Michael Jai White it got me in the mood to watch the original classic Sudden Death starring Jean-Claude Van Damme and Powers Boothe so I decided to randomly put together a top 10 of my favourite moments from the film.

In case you didn’t know Sudden Death tells the story of Ex-fireman Darren McCord (Jean-Claude Van Damme) who has a new job working security at the Pittsburgh Civic Arena. Hoping to impress his kids, he’s scored tickets to the Stanley Cup Finals, unaware that the place has been taken over by a group of terrorists. Ex-CIA agent Joshua Foss (Powers Boothe) is holding the vice president hostage in a press box and plans to blow up the building if he doesn’t pay the ransom. But, when Darren learns of his scheme, he jumps into action to save the day.

This is edge of your seat stuff and one of the most tense and exciting moments in an already nail biting thriller of a movie. Will the stadium explode or will someone score a goal and save the day?

Darren goes into full on MacGyver mode in this scene as he constructs a nasty little weapon which he gets to use within literally a few seconds; when one of the terrorists finds him their interaction is brief… but memorable.

8. The Best Kind of Lunatic

Oh Joshua Foss, you really were a merciless bastard; Powers Boothe is just a monster in this movie and the way he just casually executes people in this scene perfectly demonstrated that Mr. McCord has his work cut out for him.

7. I’ll Find the Bombs Myself

Darren is frantically on the phone with the cops telling them the situation and unsurprisingly they are being pretty unhelpful but their call is interrupted by some cars not doing what they’re supposed to and the evening takes a downturn.

After we find out that Hallmark (Dorian Harewood) is a two faced bastard he has a confrontation with Darren that ends quite badly for him and if I may quote Bane… “it will be extremely painful… for you!”

I always thought the dude who played the henchman in this scene just looked too evil and I found it hard to believe they would let this guy through even with all the ID in the world. Either way he’ll not be having chicken again any time soon.

This is another nail-biting sequence where Darren has had to disguise himself as the goalie to escape from the terrorists… now all he has to do is be good at hockey.

3. The Death of Joshua Foss

Powers Boothe was super evil in this movie and arguably his most despicable villain to date (aside from maybe Tombstone) so this drawn out death of him screaming before being killed by a fireball is incredibly satisfying.

2. McCord vs. The Penguin Mascot

I know you’re probably expecting this scene to be number 1 and it was indeed close as this is one of the most entertaining movie fight scenes of all time. You have the ridiculousness of the woman in the penguin outfit then the frankly awful way she dies to counteract your laughter.

This is arguably the most action hero-ish moment of Jean-Claude Van Damme’s career and I was lucky enough to see this movie three times when it was in the theatre initially and every time me and my dad practically jumped out of our seats. John Debney’s incredible score ratchets up to 11 as Darren McCord fearlessly leaps off the roof and swings on some lights to rescue his daughter and save the day. HELL YEAH! Also I think the scene whenever JCVD hugs his son at the end is one of his best ever moments of acting; he doesn’t say much but the emotion and exhaustion is all over his face making it surprisingly moving.