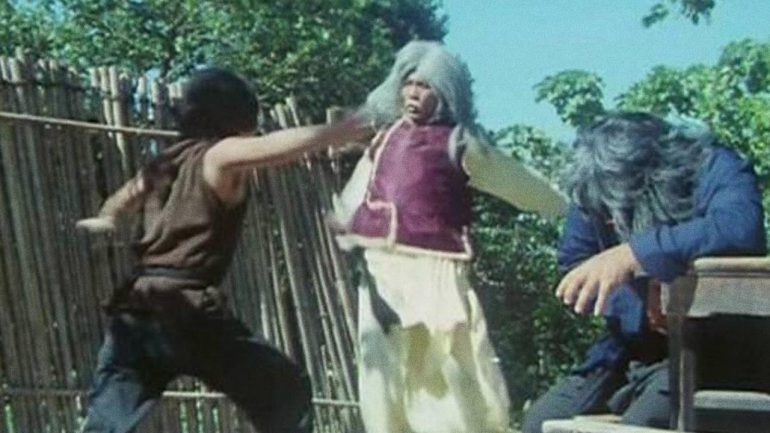 With some awesome hairstyles and plenty of kung-fu action The 36 Deadly Styles is the perfect movie to watch while inebriated.

Plot: A man comes into possession of The Secret Book of 36 Deadly Styles. A series of legendary masters, Silver Fox, the Ghost Face Killer, and Bolo among them, team up to steal the book for their own nefarious plans.

Review: First of all let me say that this movie has the greatest hairstyles you will ever see in any movie… ever. Bolo Yeung has an early role as a villain (shocker) with arguably the best hairdo I’ve ever seen. It looks like something from a Timotei commercial.

You also have the awesome bad guy with the long hair and beard who fights with his arms behind his back and really his name should just be Bad Motherf**ker, because you just know when he fights it’s gonna be awesome…

I don’t even know what the story was about; some clans appear to fight because they think each other’s kung fu sucks or something. Who cares? It’s just an excuse for awesome fight scenes, bad dubbing and epic hair.

The first half of the movie makes little sense and one of the bad guys (who even dresses in drag at one point) is just annoying and lame. I couldn’t wait for him to die.

The last 20 minutes are the only part that’s remotely coherent with some awesome training montages and a decent final fight scene. The martial arts in the movie are excellent overall and I frankly had a blast with the movie.

The music and editing are hilarious which makes it all the more entertaining. Grab some beers and prepare for a good laugh.