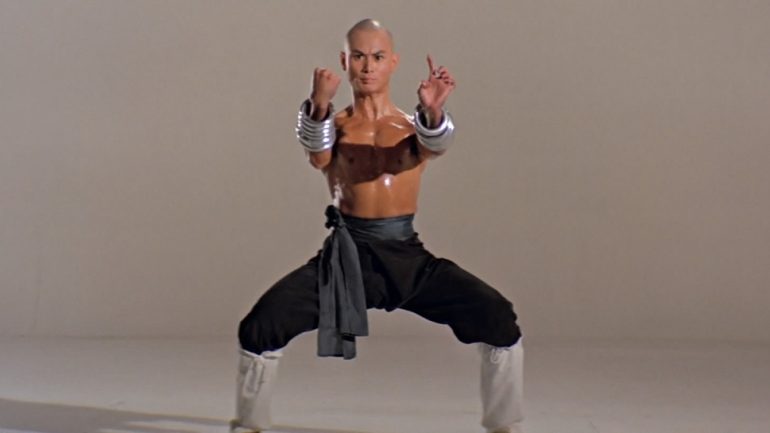 If you’re a fan of kung-fu then pick this movie up ASAP as it’s essential; although slow in parts it’s totally worth the wait.

Plot: The anti-Ching patriots, under the guidance of Ho Kuang-han, have secretly set up their base in Canton, disguised as school masters. During a brutal Manchu attack, Lui manages to escape and devotes himself to learning the martial arts in order to seek revenge. In a short period of time he masters the deadly use of his fists, feet and palms, along with such weapons as swords, sticks, and lances. With his learning complete, he takes on the Manchus.

Review: The 36th Chamber of Shaolin is rightly regarded as one of the all-time great kung-fu movies and solidified Gordon Liu as a legend of the genre.

The interesting thing is, there are hardly any fight scenes until the second half of the film.

What I like about the story is that it’s about having the mind prepared before the body and having the sheer willpower to overcome any obstacle.

Liu brings San Te to life as a peaceful man forced vengeful when his family are killed.

The trials he undergoes at the Shaolin temple are grueling and would test any man’s limits. You are rooting for him right from the start and the buildup to the climax is worth the wait. The way he transforms from bumbling novice into martial arts master is believable but also quite thrilling.

You don’t need constant fights to keep engaged with the story and you count down until he meets the men who killed his family.

The bad guys are pretty cardboard cutout but you hate them all the same as they are pretty sadistic and mean. When San Te has the final battle you’ll be jumping out of your chair as it’s 100% satisfying.

The martial arts on display are pretty incredible even by today’s standards and although not quite as intense as say The Raid, you can’t dispute its sheer awesomeness.

It’s easy to see why The 36th Chamber is seen as one of the most influential martial movies of all time as it has been imitated many times but rarely bettered.

Overall, If you’re a fan of kung-fu then pick this movie up ASAP as it’s essential; although slow in parts it’s totally worth the wait.