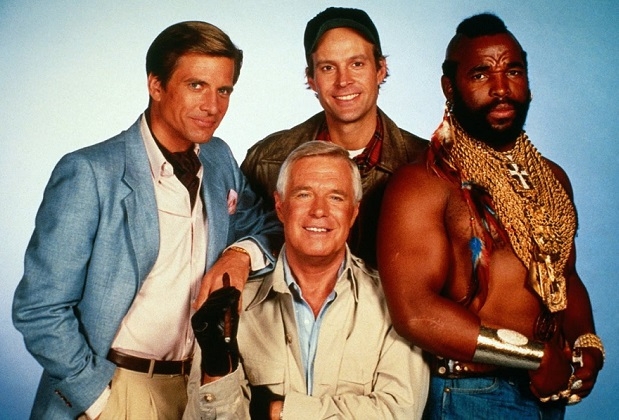 The A-Team remains one of the most entertaining action TV shows of all-time with a cast we just love, regular amazing stunts, a classic theme tune and a constant sense of fun. Sure, it becomes formulaic after a while but this was a staple of my childhood and it will always hold a place in my heart.

Plot: A team of ex-special forces soldiers on the lam from the military police (even though they didn’t really commit the crime for which they’d been imprisoned) leaves a trail of explosions in its wake. But Hannibal, Faceman, B.A. and Murdock always stop to help the little guy against some corrupt local bigwig before escaping the MPs once again.

Review: I’ve had several people over the past few months ask if we would review The A-Team TV series which is one I’ve always wanted to tackle; so over the past few weeks I revisited the classic show to see if it’s as amazing as I remember.

The A-Team is very much a product of the 80’s and feels it in every glorious second. I forgot just how funny the series was with Dwight Schultz stealing the show as the crazy but loveable Murdock and George Peppard so perfectly cast as Hannibal who has some choice one-liners and ridiculous disguises. I’m sure if modern audiences saw his “Mr. Lee” disguise now they would freak out and there is a lot of things that are politically incorrect by today’s standards. At one-point disabled guys in wheelchairs get beaten up… awkward.

I forgot in the pilot Tim Dunigan played Face and it wasn’t until the second episode that Dirk Benedict took over the role and made it his own. Dunigan must have been pissed to lose the part and he was decent enough in the role, but Benedict just had that easygoing charm that made him the believable ladies man.

Mr. T plays B.A. Barracus who is hard as nails but loyal to a fault and is great with the kids; I love the running joke about him being afraid to fly and how he is quite open about his disdain for Murdock who he considers a liability.

For several early episodes it wasn’t just the guys saving the day with Amy Amanda Allen (Melinda Culea) helping them out and proving herself quite the asset when they need her.

There are various guest stars throughout the series including Hulk Hogan, John Saxon, David McCallum, Robert Vaughn, Isaac Hayes and even Boy George(?). Keep your eyes open for a young Tia Carrera as well.

The tone of The A-Team was usually pretty light and keeps its tongue planted firmly in its cheek. Each episode is a mini action movie with great stunts and set pieces too; Stone Cold director Craig R. Baxley worked on it as 2nd unit director and stunt coordinator which I only realized when I watched it recently.

It’s funny how nobody ever dies in each episode though; things blow up, vehicles crash and yet everyone always gets up and dusts themselves off.

It still has the best theme tune and opening sequence of the 80’s and every time I hear the theme I get a shiver down the spine as it’s just so thrilling and exciting.

Once you’ve seen a few episodes you generally get the idea of the formula – someone needs help, they call The A-Team, something goes wrong, they get captured, then they build something ridiculous out of toilet paper and save the day. It’s all such wonderful escapism that I feel bad even speaking ill of it in any way as it remains one of my all-time favourite TV series.

Overall, The A-Team is classic 80s television at its best with an appealing cast, some impressive stunts, funny scripts and all kinds of various guest stars making it still stand out as one of the greatest action shows ever made. I love it when a plan comes together.