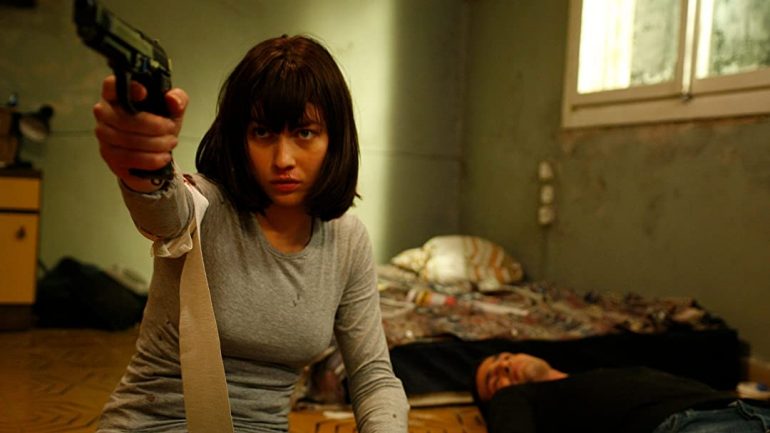 There isn’t much that’s entertaining or fun about The Assassin Next Door but the performances are strong even if it is a tough watch at times. I wouldn’t rush to see it if you haven’t already and I certainly wouldn’t sit through it again.

Plot: A woman forced to work for the Russian Mafia as an assassin agrees to help her next-door neighbor kill her abusive husband.

Review: I may go into some spoilers here so if for some reason you want to watch this movie then read no further.

The Assassin Next Door has been showing up on Amazon Prime for the longest time so I figured I would finally watch it and the fact it had Olga Kurylenko in it was the main selling point. After watching it I can safely say Olga was the only selling point as this was one of the most profoundly joyless movies I have ever seen.

Written and directed by Danny Lerner it’s set in Israel with Olga Kurylenko’s character Galia working for some shady mobsters after having left her family in the Ukraine because her child was handicapped!?! Why should I root for this person again? Galia looks miserable throughout and so does everyone else so there is no levity whatsoever.

Most of the movie is generally unpleasant with nasty moments of violence towards women and there isn’t a single male in the movie that isn’t a total piece of shit.

There is very little in the way of action so it’s mostly rather boring; the final 15 minutes has some shoot-outs but at that stage I no longer cared what happened.

The music score sounds like it belongs in a different movie as it’s really exciting but what’s happening on screen is not; it’s just distracting and doesn’t work at all.

The one decent person in this tale is poor Elinor (Ninet Tayeb) who is abused by her husband; Galia befriends her and their friendship really comes out of desperation. They both want to escape their horrible lives but it’s not easy for either of them.

To be fair both Olga and Ninet give good performances and there’s nothing wrong with the acting in the movie; it’s just decidedly mean and by the time you reach the end credits it doesn’t even give you a happy ending. Action movies generally should have a sense of fun so you can escape from reality but there is none to be had with this movie.

Also where are the police in this movie? I mean, there’s a shoot-out on a bus at the end and at no point do police or medical professionals appear.

Overall, The Assassin Next Door has very few redeeming features and just leaves a bad taste in the mouth. Olga Kurylenko gives a good performance but it’s so grim that it’s hard to recommend to anyone unless you enjoy watching women getting hurt.