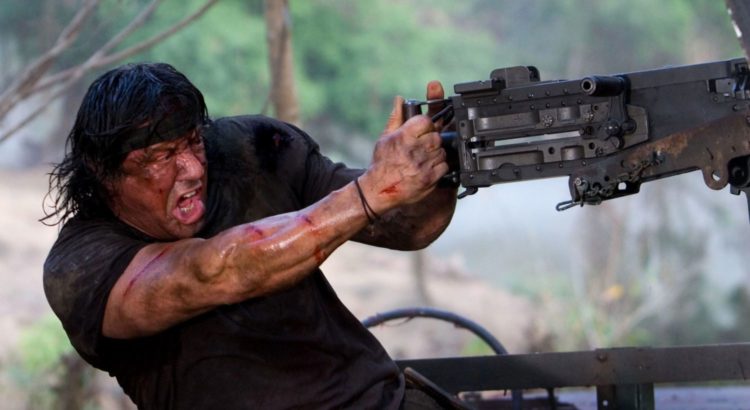 The Awesome Weapons of Rambo

In Rambo: First Blood Part II our hero John Rambo states “I’ve always believed that the mind is the best weapon” which may well be true but that doesn’t blow shit up in spectacular fashion the way explosive arrows can.

In all 4 Rambo movies he uses several kinds of awesome weapons so let’s take a look at some of them. Other weapons are used in the series but these the ones that stood out to me

In First Blood Rambo’s main weapon of choice is the M60 machine gun but he doesn’t actually kill anyone with it; he just destroys a small town… and that’s fine.

Rambo’s most iconic weapon is arguably his survival knife; once again he doesn’t kill anyone with it in this movie so let’s move on to Part 2 which has a far more interesting bodycount.

I particularly enjoy the small knives Rambo keeps in his belt which he uses during a tense moment with some pirates; the knives despatch them with ease.

One of the most iconic scenes of the series has Rambo grab the M60E3 from the side of a helicopter and use it one handed to take out an endless supply of nameless goons. He also uses an M72 LAW launcher to take out the main villain after playing dead in his crashed chopper.

The survival knife once again comes into play and thankfully he uses it this time to silently kill his enemies.

My favourite weapon though of the entire series is Rambo’s bow and arrow or “Torque Bow” as it’s otherwise known.  In fact I’m going to come out and say it that it’s my favourite action movie weapon of all time. It destroys vehicles and bad guys like it’s going out of style and as soon as Rambo takes them out you know shit is about to get real.

In Part III during the climactic battle Rambo uses a Soviet PKM Machine Gun to take on an entire army alongside his friend and mentor Trautman.

My favourite action scene from Part III is when Rambo uses the DShK Heavy Machine Gun to try and protect a village from their Russian attackers.

In the 2008 movie Rambo he uses a machete to dispose of some Burmese soldiers but I think we can all agree that the star of the show is the Browning M2 Aircraft machine gun that Rambo uses to kill about 200 soldiers in the blood-filled finale of the movie.