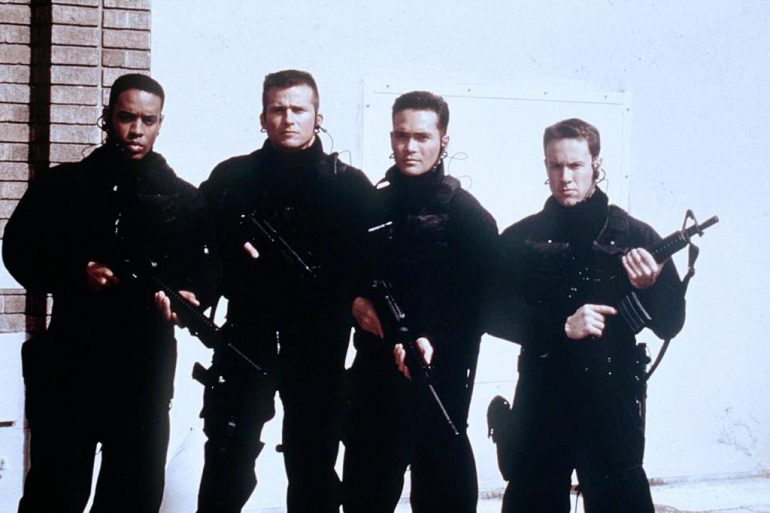 The Base is hugely entertaining 90’s action with Dacascos on fine form and a surprisingly engaging story.

Plot: In a U.S. army base, a senior army officer leads a group of young men into drug trafficking.

Review: The Base is a movie that still holds up well and is one of Mark Dacascos’ best films; not a surprise really when it’s from the same director as Commando/Showdown in Little Tokyo (Mark L. Lester). The man understands action and The Base has plenty to recommend it.

Not only does this film have some first rate action scenes but I also really like the story; it’s a bit Point Break-esque with Maj. John Murphy (Dacascos) going undercover at an army base to get some evidence against corrupt soldiers. A friendship ensues between Murphy and the leader Sgt. Gammon (Tim Abell) but due to Gammon being a murdering psychopath this is a friendship that is going nowhere fast.

The plot didn’t quite go the way I thought in parts which is why the movie still holds up well today. The dialogue isn’t overly cheesy and the performances in general are pretty decent. The odd supporting actor has some ropey delivery but the main cast all do just fine. There are also a few continuity errors too like the weather mysteriously changing in a few shots but I wasn’t all that bothered.

Dacascos was at his physical peak at this period so the fight scenes are impressive, especially the first which has him taking on 3 soldiers at once.

It also manages to get quite tense in parts as we think Murphy is going to get found out at various stages which keeps you on your toes.

The Base climaxes with chaos at the army base with tanks and other military vehicles blowing shit up like it’s going out of fashion and is thoroughly satisfying. It also has a rather epic bad guy death with is awesomely over the top.

Considering it’s a DTV movie, I was impressed by how spectacular some of the set-pieces were and it’s just a lot of fun.

Overall, The Base is hugely entertaining 90’s action with Dacascos on fine form and a surprisingly engaging story.