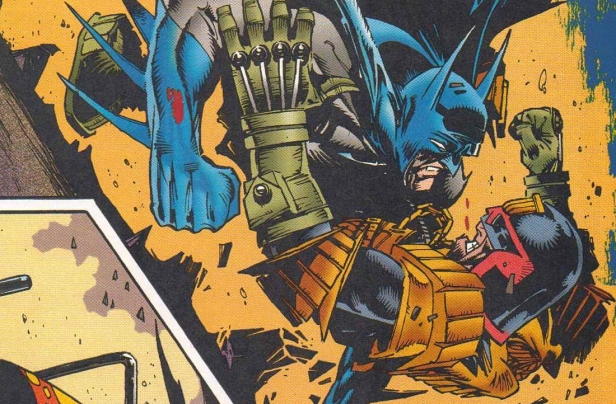 The Batman/Judge Dredd Collection  has some great artwork and writing going in some strange and unpredictable directions. There’s not enough Dark Joker and The Ultimate Riddle wasn’t very original but aside from that this is great stuff.

Plot: When Batman crosses paths with the grim and gritty Judge Dredd, things are bound to get ugly! In these tales from the 1990s, the two crimefighters face The Riddler and The Joker and battle extra-dimensional gladiators.

Review: I have always enjoyed crossovers like Terminator vs. RoboCop, Alien vs. Predator (the comics), etc. but one of the coolest ideas has to be having Judge Dredd and Batman in the same story. This was during the 90’s when crossovers in comics were hugely popular and it’s easy to see why. The Batman & Judge Dredd Collection contains four stories which are all interconnected and the two legendary crime fighters are forced to team up in order to bring down a greater threat: The Dark Judges.

There are some truly epic fight scenes between Batman and Dredd as they don’t become best buddies straight away; there eventually is a grudging respect but Dredd still considers Bats a vigilante and never fully trusts him. Dredd sees the world in black & white: there’s the law abiding citizens and criminals, so he doesn’t look kindly on a vigilante like Batman.

How do they manage to exist in the same world? Why a dimension jump belt of course, where the characters can change dimensions. Sure, it’s a pretty big stretch but it’s comic book logic so it doesn’t matter.

The artwork is different in all four stories but is fantastic and quite nightmarish in parts.

Judgement on Gotham has Batman imprisoned in Mega City after thinking he’s killed Judge Death (he didn’t) but that doesn’t stop Dredd from imprisoning The Dark Knight and being quite an unlikable ass. It’s cool seeing Judge Death team up with The Scarecrow as they look incredibly creepy and sinister.

Vendetta in Gotham is the most action-packed of all four stories and is essentially Bats vs. Dredd and they beat the living crap out of each other. It’s really satisfying and everything you’d want from a crossover like this.

The Ultimate Riddle was OK but arguably my least favourite of the stories as it was nothing new story-wise.

Die Laughing is easily the best story as The Joker is transformed into a Dark Judge; things get crazy really fast but I think that we don’t see enough of The Joker as a Dark Judge; it builds up and is over too fast.

Overall, if you’re a fan of Batman or Judge Dredd then you really need to own this collection; it’s got great artwork, excellent writing and plenty of action too. There’s a also a bonus short story featuring Lobo.