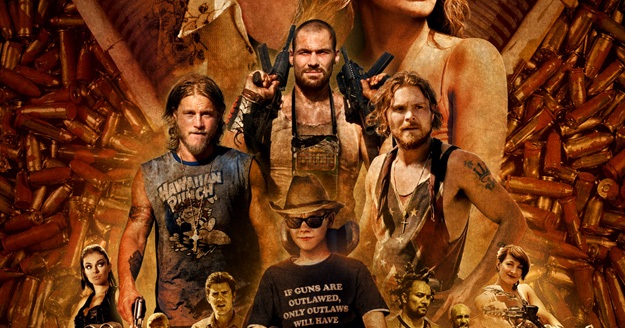 The Baytown Outlaws is a hilarious romp with 3 of the most likable scumbags I’ve seen for a while.

Plot: When three redneck brothers agree to help a woman save her son from an abusive father, they become targets on the run from an odd cast of characters.

Review: Boy was this movie a lotta fun; it was filled with politically incorrect humour and 80s action movie references from beginning to end. If a film can find a way to offend people then it’s got my vote. I found myself in hysterics at some points.

I don’t know how a bunch of redneck hitmen end up being likable but they manage to pull it off. Clayne Crawford, Travis Fimmel, Daniel Cudmore are hilarious as the 3 brothers who are constantly fighting… and killing. The one thing about this movie is the casual brutality which always brings a smile to my face.

Exploding heads galore, Zoe Bell as a psychotic assassin and Billy Bob Thornton as a totally hilarious bad guy just make the film even more fun. “Why isn’t she naked?” ” I dunno, Boss”, Well find out!” That’s just my kinda humour to a tee. I gotta interview the director at some point: I think we’d be friends.

I love the music with the twanging guitars and just all round vibe of badassery. There are references to Rocky IV, Terminator and more so any fan of classic action films will just have a blast with the movie.

As fun as it is though I have to say that I found the ending a bit of a letdown and wanted something a bit more exciting to happen with Billy Bob Thornton’s character. It felt like a bit of a cop out and wasn’t very satisfying.

The sick humour may not be for everyone but I have to say that it worked for me. Eva Longoria also has a small role, but her character is sympathetic and one of the few “decent” people in the movie.

Overall, The Baytown Outlaws is a hilarious romp with 3 of the most likable scumbags I’ve seen for a while.