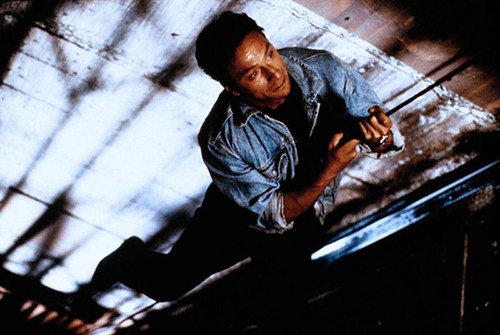 Jeff Wincott has always been one of my favourite action stars; during the 90’s heyday there were new action heroes cropping up every few weeks but the difference with Wincott is that he could act as well as kick ass.

As a tribute to the man himself I thought I would countdown some of my favourite action movies of his which you can check out below.

PLOT: Harlin Garret loses his memory and finds himself closed in a facility claimed to belong to the state security services. The manager tells Garrett he used to be a killer for the mob but Garrett refuses to believe him. Then he is forced to kill people that are a “Risk to the state security”, but the whole story gets complicated when Garret falls in love with one of his victims…

Although not an amazing movie it has a cool story and I’ll always watch anything that’s about hitmen. This also has the great Michael Ironside which makes it an automatic must see. It’s a little slow in the middle but there are a few stylish moments and satisfying beatdown of potential muggers. It also gets points for a daring ending.

PLOT: A martial arts-trained lawyer (Jeff Wincott) is forced to fight in illicit matches after he is framed for a crime, is dismissed from his firm, and all his assets are tied up, including his clothing and furniture after he is evicted from his apartment.

This is another movie that’s a little out of left field as Wincott plays a lawyer who makes some poor choices, framed for a crime, loses his job and is forced to fight. The story is unpredictable and there is enough action to keep genre fans entertained.

PLOT: Mastermind and terrorist leader Stein Kruger is serving time in prison. On the other side of town, FBI agent McNeil has resigned after his partner was killed in a hostage situation. Kruger’s mercenary buddies take over a factory, demanding $10 million in uncut diamonds as ransom. The authorities meet his demand, but Kruger doesn’t release two of the hostages – including McNeil’s father

Jeff Wincott does his own Die Hard clone which has the added bonus of Patrick Kilpatrick as the awesomely named villain Kruger . It has plenty of action and is a well paced little actioner.

6. No Exit AKA Fatal Combat

I love movies where people are forced to fight to the death and No Exit is one of the better ones; it’s also quite disturbing with Sven-Ole Thorsen playing one of his most sadistic villains who actually rapes another guy. Thankfully we don’t see it but it still manages to be pretty disturbing. The good news is Jeff is there to kick some ass and eventually save the day. The opening scene of this movie is also quite a tough watch as Jeff’s Professor throws some anti-Semitic slurs at one of his students to provoke him as a test.

PLOT: A gang of bank robbers, led by the ultra-violent Snake Underwood, pull off a daring mid-day heist that leaves dozens of burning police cars and scores of innocent victims in its wake. Heading the investigation into the gang is the equally violent detective Kurt Bellmore, along with his partner Doc Kane. Though the pair manage to apprehend Underwood fairly quickly, they then find themselves up against an even greater adversary: the corrupt cops who are on Underwood’s payroll, and a revolving-door legal system that just doesn’t care. If the two want to clear the streets of Snake and his gang, going by the book just isn’t going to be enough.

Although this doesn’t have much in the way of hand to hand combat, there is still plenty of action and the stand out scene is car chase through Los Angeles which still holds up today.

PLOT: A kickboxer (Jeff Wincott) fights for his girlfriend (Charlene Tilton) and his life against the boss (Steven Vincent Leigh) of bootleg bouts in Las Vegas.

Jeff plays one of his most interesting characters in Deadly Bet; he’s not a hero by any means and is a deadbeat gambler who gets in over his head. He still gets to beat people up though and you should keep your eyes open for a young Gary Daniels ad Art Camacho.

This has the dream team up of Cynthia Rothrock/Jeff Wincott and was the movie that really showed us his martial arts in action. Plenty of awesome fight scenes and it’s s sequel that surpasses the (also fun) original movie.

PLOT: A DEA agent (Jeff Wincott) and his policeman brother (Gary Hudson) clash, as one enforces the law while the other breaks it.

What surprised me most about this movie was how interesting the relationship was between the two brothers and I really liked Gary Hudson as Wincott’s brother Jack White. There was plenty of action but the story was quite tense wich is why this is  so high on the list.

PLOT: An outlaw lawman (Jeff Wincott) infiltrates a gang of vigilante ninja to save the city from the group’s leader (Brigitte Nielsen).

I totally adore this movie; from Wincott’s badass protagonist to the huge bodycount there’s a lot to enjoy. The Gauntlet scene where he takes out an endless amount of goons using his martial arts skills is the definite highlight. It also has the bonus of Matthias Hues and Brigitte Nielsen as villains which make it a must see.