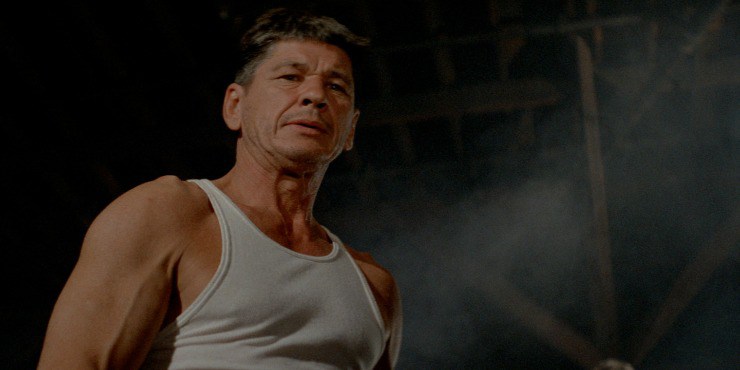 The Best of Bronson

You’ll remember back on February shortly after relaunching the site that we posted a Ranker Poll for everyone to vote what their favourite Charles Bronson movies were.

That was like choosing which child you love the most as there are too many classics to mention however, I have gone through the list and compiled a top ten of the movies which got the most votes which you can check out below.

P.S. Don’t blame me if your fave movie isn’t on the list as this was based on votes; I’m still upset that Red Sun has so few votes as it would be in my top 10 for sure.

Richard Crenna (The Rambo movies) co-stars in this Alistair MacLean movie with Bronson a little more vulnerable than we usually see him.

Plot: When diphtheria breaks out at Fort Humboldt, a train is dispatched with medical supplies and relief troops. Also on board are Utah’s governor (Richard Crenna), his mistress (Jill Ireland), a marshal (Ben Johnson) and his prisoner, outlaw John Deakin (Charles Bronson). As the train passes through the mountains, soldiers go missing, telegraph lines are cut and it’s discovered that there is no epidemic. There’s a conspiracy afoot, and it’s up to Deakin, actually a federal agent, to expose it.

Yipee-kiyay-melon farmer probably comes from this movie as that’s exactly what Bronson is and even doing that he is still cooler than any of us.

Plot: Vince Majestyk (Charles Bronson) is a Vietnam War veteran trying to keep his watermelon farm afloat when he is approached by a crook (Paul Koslo) who tries to force him into employing an inept band of farmhands. This incident lands Vince in jail for assault. There he encounters mobster Frank Renda (Al Lettieri), and instantly makes an enemy when he tries to obstruct the mobster’s escape plans. Vince must stand up for his farm and his workers in the face of Frank’s efforts to eliminate him.

Nice to see this getting some love as it has Bronson being hunted by Lee Marvin; this movie is sitting at 17% on Rotten Tomatoes which once again proves critics don’t know shit.

Plot: Isolated Yukon trapper Albert Johnson (Charles Bronson) stumbles upon a dog fight and saves the losing canine from death, but animal-owner Hazel (Ed Lauter) and his friends attack Albert for breaking up the scuffle. One of Hazel’s pals is killed in the brawl with Albert, and a group of Canadian Mounties, led by Sgt. Edgar Millen (Lee Marvin), shows up to intervene. Hazel claims that Albert was the instigator, so the trapper flees, and the mounties pursue him through the harsh wilderness.

The perfect Saturday afternoon movie has Steve McQueen in the lead but Bronson still has a sizable role.

Plot: Imprisoned during World War II in a German POW camp, a group of Allied soldiers are intent on breaking out, not only to escape, but also to draw Nazi forces away from battle to search for fugitives. Among the prisoners determined to escape are American Captain Virgil Hilts (Steve McQueen) and British Squadron Leader Roger Bartlett (Richard Attenborough). Outwitting their captors by digging a tunnel out of the prison grounds, the soldiers find the stakes much higher when escape becomes a reality.

The ultimate Men-on-a-Mission movie has an amazing cast and an action-packed finale which is why it still holds up as a genre classic.

Plot: As D-Day approaches, Colonel Breed hands the roguish Major Reisman (Lee Marvin) an important assignment: He must train a team of soldiers to parachute across enemy lines and assassinate German personnel at a French chateau. The soldiers, recruited from murderers, rapists and criminals on death row, are promised commuted sentences. In spite of their history, the 12 men prove a spirited and courageous unit. Led by Major Reisman, they will exact revenge.

It’s more slowburn than the Jason Statham remake but The Mechanic with Charles Bronson I feel is the better film as it isn’t afraid to take risks with that ending. Personally though I’d have Red Sun on here instead.

Plot: Arthur Bishop (Charles Bronson) is a veteran hit man who, owing to his penchant for making his targets’ deaths seem like accidents, thinks himself an artist. It’s made him very rich, but as he hits middle age, he’s so depressed and lonely that he takes on one of his victim’s sons, Steve McKenna (Jan-Michael Vincent), as his apprentice. Arthur puts him through a rigorous training period and brings him on several hits. As Steven improves, Arthur worries that he’ll discover who killed his father.

Hard Times is maybe director Walter Hill’s best film with Bronson on badass form with some brutal beatdowns; James Coburn is especially memorable too as the fast talking Speed.

Plot: During the Great Depression, Chaney (Charles Bronson) bare-knuckle boxes to survive. Speed (James Coburn), an avid gambler, recognizes his talent and becomes his manager. They hire a cut man named Poe (Strother Martin), and Speed borrows cash from some gangsters to bet on Chaney’s fight. They win, but Speed gambles and loses his portion and remains in debt. In the end, a rival manager named Gandil (Michael McGuire) buys Speed’s debt and forces Chaney to fight Speed against his toughest foe yet.

This remains one of my favourite Westerns and as much as I enjoyed the recent remake the Bronson-flavoured movie is still the king.

Plot: A Mexican village is at the mercy of Calvera, the leader of a band of outlaws. The townspeople, too afraid to fight for themselves, hire seven American gunslingers to free them from the bandits’ raids. The professional gunmen train the villagers to defend themselves, then plan a trap for the evil Calvera.

2. Once Upon a Time in the West

Arguably the greatest Western of all time or certainly one of them Once Upon a Time in the West very nearly took the top spot.

Plot: There’s a single piece of land around Flagstone with water on it, and rail baron Morton (Gabriele Ferzetti) aims to have it, knowing the new railroad will have to stop there. He sends his henchman Frank (Henry Fonda) to scare the land’s owner, McBain (Frank Wolff), but Frank kills him instead and pins it on a known bandit, Cheyenne (Jason Robards). Meanwhile, a mysterious gunslinger with a score to settle (Charles Bronson) and McBain’s new wife, Jill (Claudia Cardinale), arrive in town.

Not really surprising and I’d have to agree that the Death Wish movies are my favourite Charles Bronson flicks; it was pretty close between Death wish and Once Upon a Time in the West. I stand by that I love the third movie the most.

Plot: Once a mild-mannered liberal, New York City architect Paul Kersey (Charles Bronson) snaps when intruders break into his home, murdering his wife (Hope Lange) and violently raping his daughter. A business trip to Tucson, Ariz., lands him a gift from a client, a revolver he uses to patrol the streets when he returns home. Frustrated that the police cannot find the intruders, he become a vigilante, gunning down any criminal that crosses his path. The public finds this vigilantism heroic.