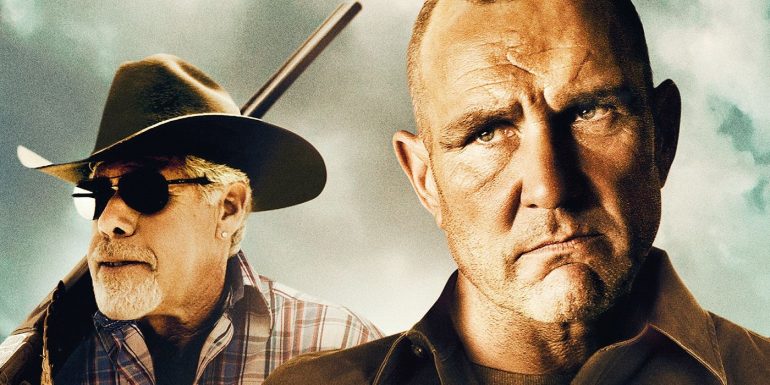 The Big Ugly’s contemplative pacing may put some viewers off but the memorable characters, sense of style, brutal fights and Vinnie Jones on top form make it worth your time.

Plot: Neeyln (Vinnie Jones) has always been the loyal enforcer for crime boss Harris (Malcolm McDowell) back in London, taking care of problems and people that disrupt his illicit business. When Harris strikes a deal with an old friend — American oilman Preston (Ron Perlman) — they find themselves in the wild hills of West Virginia. Contracts are signed and the whiskey flows in celebration, but overnight Neelyn’s girlfriend disappears, last seen with Preston’s wayward son Junior. Lines are drawn between family and friends, but nothing will stop Neelyn from getting answers — and retribution.

Review: From the trailer I could see The Big Ugly was going to be something different for Vinnie Jones and that it was, but it is also one of the best movies of his career. Jones has never been better as Neelyn, an enforcer for his crime boss Harris who can’t help but go searching for retribution after the disappearance of his girlfriend. Neelyn knows that Junior (Brandon Sklenar) is responsible, but things aren’t simple as Junior is the son of Harris’ business partner Preston.

Some may be put off by the fact that The Big Ugly isn’t constant action and is a little slow at times but I thought the characters were fantastically well drawn and it was a story that was allowed to breathe. I was totally invested in Neelyn’s arc and although he’s a flawed human being we are still behind him due to the fact that Junior is an absolute monster that needs to be stopped.

Brandon Sklenar has made Junior one of the best movie villains of the year as he thinks he is God’s gift to women but he is also a worthy opponent to Neelyn nearly besting him in a fight. Anytime Junior is onscreen it oozes tension and you know violence isn’t far off as behind his smooth smile beats the heart of an animal.

The Big Ugly is dedicated to Jones’ late wife and it feels like this role is a sort of catharsis to deal with his grief; it’s a side of Jones we’ve never seen before where he shows great vulnerability making Neeyln arguably the best role of his career so far.

Every character feels like a real person and (aside from Junior) nobody is one note; the relationship between Harris and Preston is immediately engaging as their friendship slowly unravels as Neelyn’s quest for vengeance continues.

Nicholas Braun plays Will who is another great character who is assigned to essentially babysit Junior but he is too weak to really do anything but when Junior starts to make advances on Will’s lady will he stand up to him?

I won’t say anymore about the story but it goes in interesting directions with natural dialogue and it generally avoids the clichés we sometimes see in the genre. Admittedly this is more of a drama than an all-out action picture but there is sill plenty of it; we get brutal fistfights and shoot-outs so I urge you to be patient as it really is one of the better movies I’ve seen this year. Director Scott Wiper (The Condemned) is one to watch as he has a great visual style giving the film a nice sheen; it also has a cool music score with twanging guitars which as you all know is very much my jam.

Overall, The Big Ugly is one of Vinnie Jones finest hours with a well told story, surprisingly layered characters and some bloody violence. The pacing may put some off but I ultimately found it incredibly rewarding.