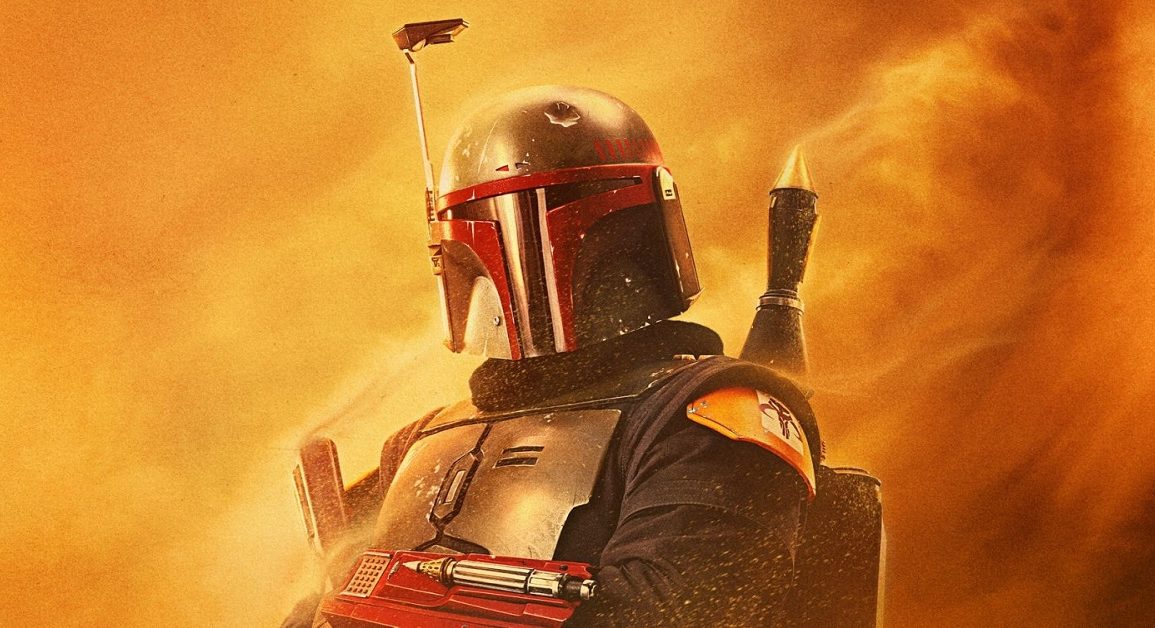 Whenever you take away the mystique of a fan favourite character in a show that doesn’t need to exist The Book of Boba Fett is what we get. It certainly has some amazing scenes with episode 6 the clear highlight but it feels like the writers had no idea who this character was so he never feels like Boba Fett, just a guy wearing his armour.

Plot: The Book of Boba Fett, a thrilling Star Wars adventure, finds legendary bounty hunter Boba Fett and mercenary Fennec Shand navigating the galaxy’s underworld when they return to the sands of Tatooine to stake their claim on the territory once ruled by Jabba the Hutt and his crime syndicate.

Review: I’m going to go into major spoilers here so if you haven’t finished The Book of Boba Fett then do not read any further.

I was never entirely convinced The Book of Boba Fett was needed; the character of Fett has been a fan favourite for many years because of not only his cool looking Mandalorian armour but his mystique. He was the most feared bounty hunter in the galaxy, ruthless and a man of few words; he works better as a peripheral character rather than the main protagonist. Sadly, the writers behind this show clearly had no idea who this character is and rarely in the (all too brief)) 7 episodes does he ever feel like Boba Fett.

Temuera Morrison finally gets to portray the older Fett and does the best he can; while character development is always necessary any sense of mystery to Boba has been removed. He takes his helmet off far too often and he talks too much (Morrison himself even noted that).

The story is just never that interesting and it’s not a good sign when the protagonist goes missing for two episodes and they end up being the best of the series. As great as it is to see Mando, Grogu, Luke and Ahsoka again it felt like it belonged in another show (like The Mandalorian or Ashoka).

Why is this show called The Book of Boba Fett? What book? Why does he want to rule as a crimelord on Tatooine? They brush over it in episode 4 with Fett saying “I’m fed-up taking orders from idiots” or words to that effect but that’s all we get.

There are very few risks this show takes keeping it mostly on Tatooine which we’ve already seen before with only episodes 5 and 6 being set elsewhere which makes it more interesting but it still takes you away from the main story. It was too obvious that they were setting up future series but what’s the point in that if you aren’t concentrating on telling a good story in this one?

It felt like the writers didn’t know what to do with the main character so they bring in all these others because they realised that Mando is better in every way; we have a more emotional connection to him and his relationship with Grogu is what keeps viewers invested; there just isn’t anything as endearing with Fett as he wanders around helmetless and getting beat up by everyone.

Filmmakers also need to let go of its current obsession with nostalgia and stop being afraid of taking risks. Yes, we all loved seeing CG Luke (who looked awesome this time I might add) training Grogu and finally share the screen with Ahsoka but for me Luke’s story ended with Return of the Jedi. I consider the sequels poorly conceived fan fiction so I pretend they don’t exist. I feel like that’s also why they brought Luke back in this and The Mandalorian as an apology tour because they know they ruined the character in that awful trilogy.

What’s so frustrating is that you have great material in the Expanded Universe (now known as Legends) especially with The Bounty Hunter Wars where you could have told a story of Fett, Bossk, Dengar and other Bounty Hunters battling it out with the Guild which would have made more sense considering the Guild was established in The Mandalorian. It would have been far cooler to see Fett (who everyone had long since thought was dead) trying to claim back his reputation as the best Bounty Hunter in the galaxy and wanting to become leader of the Guild. That would have worked better for me as it would have felt more like a crime story which is what this should have been.

Instead what we get are a series of flashbacks where Fett spends time with the Tuskens and he basically becomes soft rarely showing his old ruthless ways. Yes, the character is older and we do change as we age but does anyone really want to see that with Fett? The appeal of the character is that he is a badass but instead we get a plodding story that never really establishes the Pykes as hateful antagonists. What is even their leader’s name?

Then we get the Mods on their multi coloured Vespas who are the worst creation in Star Wars since Jar Jar Binks; their chase through Mos Espa is the least exciting chase scene I’ve ever witnessed.

On the plus side we’ve been given some nice insight into the Tuskens and they feel like more fleshed out characters rather than the monsters they were portrayed as before. Unfortunately, they all get killed off screen and we don’t even know if that awesome female one died; it just moved on to the next episode.

There were some wonderful moments though like Fett and the Tuskens dancing a Haka around the fire as he becomes one of them, the raid on the Pyke’s train in episode 2, Boba dropping a seismic charge into the Sarlaac pit and him using Slave 1 (which IS its name not that Firespray shit) to take out the bikers. I just wanted more of that… which we eventually get in the final episode. Watching Boba and Mando using their jetpacks followed by Fett riding a Rancor into battle was awesome but it felt so empty because the Pykes just felt like generic bad guys that needed killed so there was no emotional investment.

I was so pumped when they introduced Cad Bane and he looked more terrifying than he ever was in The Clone Wars… then they kill him off in the next episode.

My biggest question by the time we reach the end was why does this show exist? The best scenes could easily have been added to The Mandalorian and all it did was take away any sense of mystery to the character of Boba Fett.

Nearly every aspect of the show feels rushed with certain plot lines getting built up then rapidly glossed over like Grogu’s “hard” choice Luke gives him at the end of episode 6. It’s not really surprising the decision he takes as we all know Mando and Grogu need to be together as The Mandalorian season 3 would lose viewers without that double act.

One of the biggest plus points of the show is the addition of Black Krrsantan who was wonderfully realized and he looked truly fierce. I also think the best character of this show is Fennec Shand played by the amazing Ming-Na Wen; she feels like a far more fascinating character than Fett and she isn’t afraid to be ruthless.

I liked some of the music and the end credits theme is growing on me but it just doesn’t sound Star Wars-y enough and we even get some awful techno-style music at some points. It needs that fairytale John Williams style music as that’s what Star Wars is – a fairytale but I don’t think Disney understand that (aside from maybe Dave Filoni).

Anyway, this has turned into more of a rant than anything and it sounds like I hated the show but despite the many flaws there were enough moments for me to enjoy it with episodes 5 and 6 the clear highlights. Watching Boba Fett riding a Rancor was also awesome, the purge of Mandalore was straight out of Terminator and for the most apart the visual effects look decent considering this is a television show.

There is plenty of action although the episodes directed by Robert Rodriguez seem to be the weakest as the fight scenes aren’t as good as they could be. I also wish Fett used Slave 1 more as he only uses it in one episode.

Overall, The Book of Boba Fett doesn’t really need to exist as it’s just there to provide a few fan service moments and set up future shows but the story just isn’t that interesting with poorly established villains and it all feels a bit rushed. There could have been so many cool things they could have done so by the end it just feels like a missed opportunity.