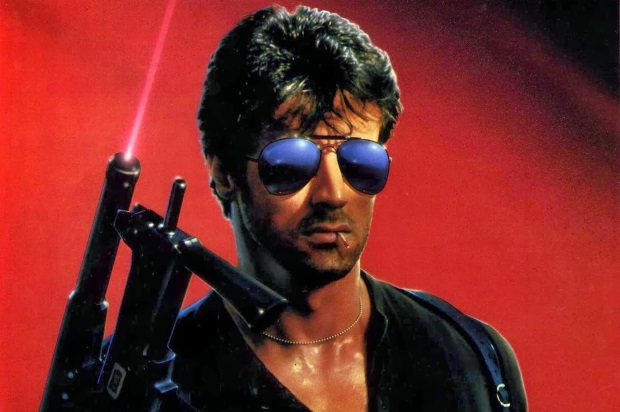 Cobra is one of my very favourite Sylvester Stallone films; although it comes across as an 80’s version of Dirty Harry, it’s actually more like a slasher/horror movie. While scouring the net (mostly IMDB), I thought it would be cool to find some stories and facts about the film that some may not know. So here goes.

According to IMDB the movie was based on the novel “Fair Game” by Paula Gosling. In 1995 William Baldwin and Cindy Crawford made Fair Game (1995), which was also based on the same novel by Gosling. Just like Cobra, Fair Game was also re-edited by Warner Bros. in post-production due to the test audience disliking original cut.

It’s funny, I’ve seen the Cindy Crawford film and it’s story is utterly different from the Stallone movie. I’m going to have to track down this novel now and read it.

Where most action heroes are called John or Jack, Stallone’s name is Marion Cobretti, apparently as a nod to John Wayne.

Sly has rarely been more bad ass than in Cobra but as always he still keeps the twinkle in the eye with some choice one-liners. “Go ahead, I don’t even shop here anyway”. Love it!

Interestingly enough, the 1950 Mercury driven by Cobretti was in fact owned by Sylvester Stallone.

The gun has become utterly iconic and even seeing a picture of them, you know straight away what film it’s from.

Although seen as a flop, Cobra grossed $12,653,032 on its opening weekend, which was the largest opening weekend in the history of Warner Brothers up to that point.

Much of David Rasche’s role was cut from the final version. In the behind-the-scenes documentary, an additional scene featuring him is shown being filmed.

There is a longer workprint available but I can’t seem to find it; it’s about 40 minutes longer and there’s a lot of cool stuff which was edited out and I’d love to see the complete version of the film.

Brian Thompson auditioned seven times for his role before he was hired. On fourth audition he met Stallone and both he and director thought that Thompson was too nice to play the role of Nightslasher. But after screen test, he immediately got the job. Thompson repeatedly asked Stallone about his character Nightslasher, like how Stallone would want Thompson to play him, character’s background, his reasons for doing what he’s doing… but Stallone wasn’t interested in explaining Thompson’s character and he basically told him that he is evil because he is evil. In an unfortunate surprise for Thompson, when filming of the movie was finished, director Cosmatos told Thompson, for no reason; ” You could have been good if you had listened to me.”

I found some more information on the workprint of the film which I’ve pasted below. Not one to take credit for other people’s hard work, this is a comment by Jack Craven on www.worldwidedvdofurms.com.

There are no opening credits and red color in the beginning, but opening montage is still shown.

Opening shootout is longer, lots of extra shots of customers are shown.

Extended dialogue scene between Cobra and Mexican low riders plus scene is edited differently, Cobra checks his mailbox, talks briefly to the old janitor and walks next to a woman walking her dog in the hall.

Scene where Nightslasher kills first victim has few extra shots of victim’s dead body, and entire scene is not shown in slow motion like in DVD version. Slow motion was probably added later when scene was cut since music is same in both versions.

After the first murder, small Asian kid brings a box in some police station, and when one of the cops asks him who gave it to him, kid says that it was some men outside. Same cop tells the kid to get himself one of the toys from some other box on the other side of the room. While he is checking the box that kid brought, cop sees blood dripping under the box. Then Nightslasher calls and tells the cop “Her hands are with you, her soul is in another world.” Cop tells some other cop to trace the call and then scene cuts to the morgue scene with Cobra and others.

Autopsy scene (where Cobra says that he wants to be involved in case) is extended with few extra shots and some more dialogue.

Second Nightslasher murder scene also has few extra shots of dead body, but due to the picture quality not much is seen actually.

Small extended bits with Cobra in his apartment, waiting for call from police chief and later he and Tony, his partner arrive on meeting with chief and Monte. “Skyline” track from official soundtrack is heard during this scene. This track is not anywhere in theatrical version.

There are couple of extra dialogue scenes with Ingrid and Dan (her photographer) right before her photo shoot.

“Angel Of The City” montage scene is extended. There are more scenes of Cobra and Tony walking around the city and several shots of gang members at their day jobs.

Dan’s death scene is extended. He is hit more times with axe.

Guy with glasses during parking garage attack is also hit more times with axe. It appears that final hit gets him in the head while he is on ground, although his death scene is more implied than shown.

Conversation between Nightslasher and Stalk where she tells him how Cobra is after them and that he is “very dangerous”, but Slasher simply says that they will take care of him. This deleted scene explains why did the gang attack Cobra at his place and how did they know where to find him.

There are few more small scenes in Nightslasher’s place where he is practicing with his knife. Part of this scene can be seen in one of the theatrical trailers.

Attack on Cobra’s place is longer and more violent. Sniper guy from the gang arrives in his car, gang member in the street looks at apartment and puts his mask on, two gang members are shown climbing up the stairs and cutting the light off while sniper guy is looking from his car. There is longer (only few seconds) death scene of first guy that gets shot, and right when he goes towards the stairs Cobra is attacked by third gang member (in DVD version he is last seen lying on ground). At the same time, sniper guy from the gang who was waiting for others in his car drives away after he saw other gang member falling from stairs when Cobra shot him. Cobra manages to defend himself and he kills last gang member with his bare hands. Scene is quite brutal, considering that you can see blood going from his mask. Also, music is same like in the DVD cut, but much louder.

While most of this scene is used in TV cut, death scene of final gang member is not shown.

Janitor’s death scene is longer, but only for about 2 or 3 seconds.

There is additional murder scene in hospital. Nightslasher stalks and kills same cop who was talking with nurse who also gets murdered by Slasher just minutes after. This deleted scene fixes continuity mistake from theatrical version of the movie in which same cop is seen talking with nurse and later he is no longer mentioned by other characters.

Dialogue scene between Cobra and other cops is extended.

Second dialogue scene between Cobra and other cops is also extended.

Gang members perform some strange ritual before they start to follow Cobra and others. Ritual ends with some of them breaking the mirror with their weapons. One of the trailers for the movie (one with “Feel The Heat” song playing in the background) actually shows small part of this scene and couple parts of the other deleted scene where Nightslasher practices with his knife.

“Feel The Heat” montage scene is longer with extra dialogue between Cobra and Ingrid.

There is some extended dialogue scenes between Stalk and Gonzales.

There are lot more shots of gang members following Cobra and others, also this part of the workprint is edited differently than the theatrical cut.

Town attack scene is much longer and gorier with many additional murder scenes. One scene that is worth mentioning is when motel owner is watching Hitchcock’s DIAL M FOR MURDER and in the scene where Swann starts to strangle Margot, motel owner gets strangled with barb wire.

During the motel shootout and pick-up truck chase more explicit close-ups of bullet hits and holes are shown, plus several more gang members are shot by Cobra. Uncut version of this scene is actually more accurate than theatrical version where lot of continuity mistakes are present due to the cuts.

Pick-up truck chase and shootout scene is also longer. Theatrical version of this scene has some continuity mistakes due to the cuts made either by studio or MPAA. Notice broken window on the left side of the pick-up: there was a small part cut where one of the bikers smashes the window with meat cleaver. One TV trailer shows this scene.

Factory shootout has additional action scene where Cobra is running through the orchard while being shot at by sniper. Two scenes where gang members are burning alive are little longer. Nightslasher’s death scene has several close-ups of his wound intercut with Cobra pushing him onto the hook and also while he is burning he screams. It’s possible that this scene was cut because it was too intense or too real looking.

Extended ending where Cobra and Ingrid exchange few words with three cops armed with shotguns. Later when they both get on motorbike they ride through the locations where chase and shootout took place.

Final credits are not shown in the ending of the workprint.

Ending music in the workprint is Sylvester Levay’s “Skyline” from original soundtrack release. It’s possible that when scene was cut for theatrical release original music didn’t fit well, or somebody, maybe even Stallone himself, wanted for movie to end with song “Voice Of America’s Sons” that was used for music video about the movie.

There’s even a petition to get the workprint released which you can sign over at Change.org.

So there you go, kids; all sorts of Cobra flavoured goodness to chew on; still annoyed we never got a sequel… oh well.