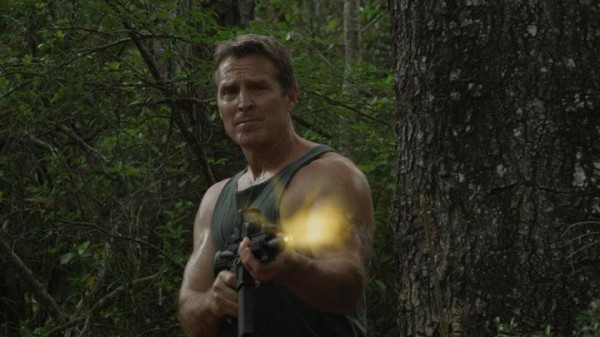 The Deadliest Prey knows exactly what it is and as a homage to classic low-budget exploitation flicks, it’s huge fun with plenty of violence and Mike Danton rules.

Plot: nearly thirty years ago, the highly decorated special forces soldier Mike Danton (Ted Prior) was inadvertently sucked into a violent game of cat and mouse with colonel Hogan (David Campbell), his ex-commanding officer. Thrown out into the middle of the woods with nothing but a pair of shorts on his body and no weapons, Danton was forced to fight dozens of armed soldiers to survive. And he did. Killing all but one. Now, all these years later, the one he left alive is coming back to haunt him, as the bitter colonel Hogan gets released from prison and immediately seeks out his revenge on Danton. And this time he is broadcasting every bloody moment of it over the inter-net to prove to the whole world that he is in fact the very best there is.
Some people just don’t learn.

Review: Deadly Prey was a hugely entertaining cheap-ass exploitation flick from the late 80’s. It was basically a Rambo type one man army movie with dodgy acting and yet, I had a blast with it.

Imagine my joy when I heard about this long overdue sequel called The Deadliest Prey featuring the same hero and villain from the first movie. I love the whole concept of a bad guy taking revenge over 20 years later.

Mike Danton is once again played by Ted Prior who still looks in great shape after all these years and David Campbell returns as Hogan out for revenge. Prior is a likable lead and Campbell is hilariously over the top as the villain.

The Deadliest Prey is pure old-school action; it’s been a while since we’ve had a good One Man Army movie so this was a welcome addition to my DVD collection.

Is it a good film? Well, it’s certainly entertaining and very well paced with a huge body count too. So these all go in its favour. The acting isn’t that great though and the three computer nerds are pretty annoying, especially the girl who keeps saying “True that”. However, what happens to them by the end of the movie really works out quite nicely.

The first movie was hardly Oscar caliber so you kinda know what you’re in for with this one; for some reason this movie looks cheaper though and almost comes across as a fan film.

It’s pretty much a retread of the original with several references, including the same music… which was awesome. And yes one of the bad guys gets his arm cut off, beaten with it and then shot in the face which frankly made me give the movie an extra star rating.

Overall, The Deadliest Prey knows exactly what it is and as a homage to classic low-budget exploitation flicks, it’s huge fun with plenty of violence and Mike Danton rules.