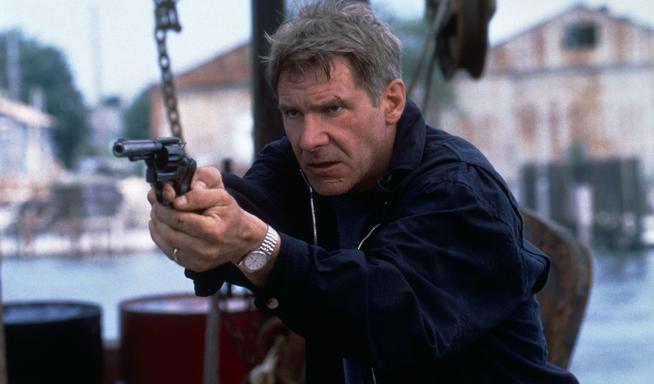 The Devil’s Own is a joyless affair that has a few entertaining moments but Pitt’s accent is a bit dodgy and Ford sleepwalks through it so isn’t something I plan on watching again any time soon.

Plot: As a favor to a friend, policeman Tom O’Meara (Harrison Ford) lets visiting Irishman Rory Devaney (Brad Pitt) stay with him and his family in New York City. Rory’s visit is quiet at first, but when Tom and his wife, Sheila (Margaret Colin), return home one day, they’re accosted by intruders. Tom soon realizes that Rory is in the Irish Republican Army. When it becomes clear that Rory’s stateside trip is part of an effort to transport illegal guns to Dublin, Tom is compelled to stop him.

Review: I just watched The Devil’s Own for the first time recently; I’d held off as the story always felt a bit too close to home and Brad Pitt’s Irish accent sounded awful from the trailers. After viewing the film it was better than expected and although Pitt did a far better accent in Snatch this isn’t quite as terrible as I predicted.

Where The Devil’s Own falls down is the narrative which lacks urgency and plods along never really building up much tension or excitement.

Ford is the same as he is in everything, frowning occasionally and looking concerned but his character Tom is at least a good man who tries to see the best in people. I never cared for Pitt’s Rory Devaney as he is after all a killer so it’s hard to sympathise with him no matter what happened in his childhood.

There is an impressive supporting cast including Treat Williams who is at his villainous best and Rubén Blades who plays Tom’s doomed partner Eddie. He even talks about what he’ll do when he retires at one point. Oh Eddie, you won’t even live to see the end credits of this movie never mind retirement…

After reading all the background dirt on IMDb it sounds like the production was quite the mess. Apparently Brad Pitt “wanted to leave the production but was threatened by a lawsuit. In the February 2, 1997, issue of Newsweek, Pitt called the film a “disaster”, and said that “it was the most irresponsible bit of filmmaking – if you can even call it that – that I’ve ever seen. I couldn’t believe it”. Rumors of fighting on the set (especially over which star would be the focus of the film) plagued the production. The original script was discarded and there were at least seven subsequent rewrites. Pitt said the final version was “a mess”. “The script that I had loved was gone,” he said. “I guess people just had different visions and you can’t argue with that. But then I wanted out and the studio head said, ‘All right, we’ll let you out, but it’ll be $63 million for starters.” (Harrison Ford later noted that Pitt “forgot for a moment that he was talking to someone whose job it was to write this shit down“.)”

The final product also ended up less dark than the initial script which included Pitt’s character “alternating between slaughtering all of the inhabitants of a crack house and crooning Irish music at a local pub; Ford’s Tom O’Meara was a “hair bag cop” who got that unflattering nickname because he’s been a uniformed officer for so long; and an entire scene consisted of O’Meara and his partner throwing vile insults at each other. This draft was the one that Brad Pitt read before deciding to sign onto the project”.

The Devil’s Own is a rather ugly film with a constant grey sky in both the Ireland set scenes and the New York portion making sure that you feel no joy whatsoever while viewing. It has little in the way of humour which isn’t a surprise considering the subject matter. There isn’t anything particularly spectacular or memorable about it, but it has a few decent action scenes which elevate it.

James Horner’s score is very Oirish sounding but there isn’t anything that sticks in the head after watching.

Overall, The Devil’s Own really is the kind movie I would only watch once; it has few decent action scenes but there isn’t anything remarkable about it other than all the behind the scenes stories which would make for a far more entertaining movie.