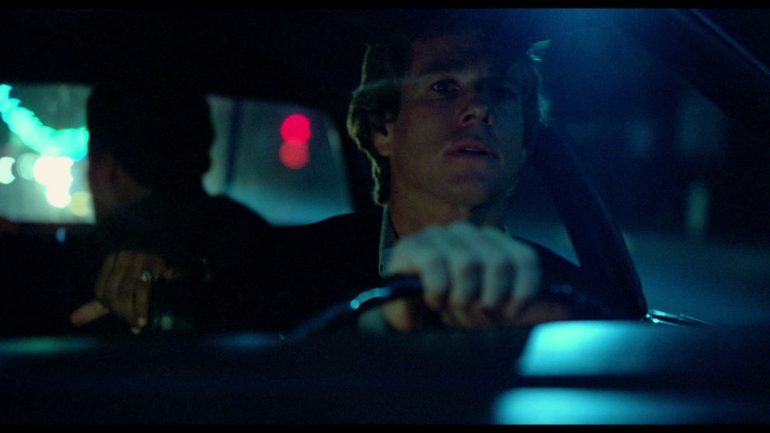 There are few things better in this world than car movies and The Driver and Vanishing Point are two of the very best, but which is the better movie?

“The Driver” is a specialist in a rare business: he drives getaway cars in robberies. His exceptional talent prevented him from being caught yet. After another successful flight from the police, a self-assured detective makes it his primary goal to catch the Driver. He promises remission of punishment to a gang if they help to convict him in a set-up robbery. The Driver seeks help from “The Player” (Isabelle) to mislead the detective.

There are few people cooler than Ryan O’Neal in this movie and he plays a character simply named Driver. The movie is directed by action legend Walter Hill and is arguably one of his best movies. O’Neal oozes coolness and it’s obvious that Ryan Gosling’s Drive is closely modelled as it’s practically the same film in places. The movie moves along at an awesome pace and any movie with Bruce Dern in a large role gets my vote. Ever since I saw him the Tom Hanks classic The ‘Burbs, I’ve been a huge fan. I actually wish they’d hurry up and release this movie on Blu Ray as it will look fantastic.

Kowalski works for a car delivery service. He takes delivery of a 1970 Dodge Challenger to take from Colorado to San Francisco, California. Shortly after pickup, he takes a bet to get the car there in less than 15 hours. After a few run-ins with motorcycle cops and highway patrol they start a chase to bring him into custody. Along the way, Kowalski is guided by Supersoul – a blind DJ with a police radio scanner. Throw in lots of chase scenes, gay hitchhikers, a naked woman riding a motorbike, lots of Mopar and you’ve got a great cult hit from the early 70’s.

I’ve said before that there aren’t enough naked chicks on motorbikes in today’s cinema and sadly that remains true. Thankfully Vanishing Point delivers such a scene which arguably makes it the greatest movie of all time. You also have another super cool protagonist who goes by the name of Kowalski, played by Barry Newman. Now you may be thinking why does this sound so familiar? But if you’re a fan of Tarantino then you’ll remember this film is discussed and referenced constantly in his Grindhouse movie Death Proof. They even use the same car for the climactic chase with Kurt Russell. You can tell this movie was out in 1971 as it still has that air of the 60s with some really random things going on. You’ve not only got random naked girls on motorbikes but you also have the DJ “Super Soul” who essentially narrates the cross country chase between the police and Kowalski.

In terms of “cool” it’s a tough choice between our two protagonists; Both Ryan O’Neal and Barry Newman have awesome seeping from every pore. I think Kowalski maybe wins this round as he ends up getting chased essentially just because he feels like it. He’s just so laid back that he doesn’t even care how it ends, but for everyone who has seen the movie you’ll know that it doesn’t end all that well for him…

Which movie has the better car action? Both have some great chases but I think I’ll have to give this one to The Driver; the chase scenes are pretty much all done in the city which adds to the sense of danger and excitement. But then Vanishing Point has a naked chick on a motorbike and the car is pretty sweet too… hmmm…. OK, this round is a tie.

The overall winner for me is The Driver; it’s a great double bill to watch with 2011’s Drive and Walter Hill’s direction is awesome. Ryan O’Neal’s cool as ice character is fantastic and the chases kick all kinds of ass. Vanishing Point may have the naked chick on the bike but I think I prefer the ending to The Driver as it’s a bit more uplifting and frankly less random.