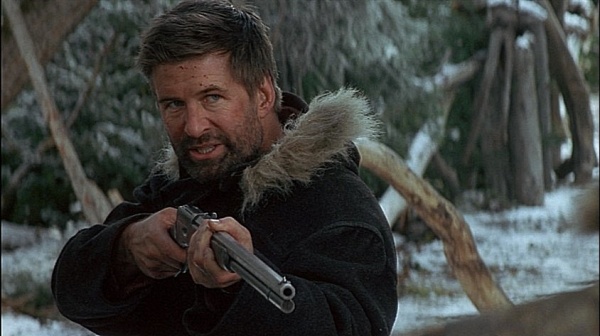 The Edge is an underrated gem with some stunning scenery and Anthony Hopkins at his absolute best. We’ve seen it many times before but it’s still a great movie.

Plot: The plane carrying wealthy Charles Morse (Anthony Hopkins) crashes down in the Alaskan wilderness. Together with the two other passengers, photographer Robert Green (Alec Baldwin) and assistant Stephen (Harold Perrineau), Charles devises a plan to help them reach civilization. However, his biggest obstacle might not be the elements, or even the Kodiak bear stalking them — it could be Robert, whom Charles has reason to believe is having an affair with his wife and would not mind seeing him dead.

Review: Here’s a long forgotten, but awesome survival movie starring Anthony Hopkins and Alec Baldwin. I watched my DVD of it yesterday for the first time in years and forgot what a beautifully shot film it is. Those spectacular vistas are breathtaking and between people getting eaten by psychotic bears, you can really get carried away by the sheer majesty of it.

But enough of that nonsense, “what of the violence?” I hear you say! Well, it’s not an out and out actioner but there’s enough tension and bear related chicanery to provide plenty of entertainment. There’s something about survival movies, when man is pitted against the wild with only his wits; pulls me in every time.

Anthony Hopkins is on fine form as a jaded billionaire (Charles Morse) who is stranded, unequipped, by a plane crash (with Alec Baldwin and Harold Perrineau) in a dangerous wilderness. They find that they are being stalked by a “man-hunter” Kodiak Bear who’s hunger will only be satiated by human flesh… good times.

Baldwin gives a great performance and has some great lines, but Perrineau has “bear food” written all over him from the start.

The film starts off slowly and the pacing may not be for everyone, however when their plane crashes you barely stop for breath as they struggle to survive against nature.

Jerry Goldmsith provides one of his classic scores with a magnificent theme tune,which will be going through your head for hours after watching it.

It’s a shame there isn’t on Oscar for Best Performance by a Bear as the creature in this movie was fantastic. It’s not CGI or animatronic but a genuinely real and scary looking bear. When he attacks it is absolutely terrifying and remains a shocking scene to this day.

It’s not just about a bear with an attitude though; the main story is the relationship between Hopkins’ and Baldwin’s (Robert Green) characters. Charles is suspicious that Robert has been having an affair with his wife and won’t let go of it. At first Robert jokes about it, but as things get more desperate the truth comes out and the men begin to turn on each other.

Charles is a rather detached character who doesn’t trust anyone and thinks that whenever someone is nice to him, they are looking for money. Because of this he is rather lonely and later admits that he’s never had any “real” friends. Despite this, he is a resourceful man who ends up helping them all to survive for as long as possible. Robert of course, resents this as he is jealous of Charles’ great wealth. We don’t find out his motivations until the final act, which adds a nice extra bit of drama to proceedings.

Overall, The Edge is one of my favourite survival movies and really deserves a watch; even if you just want to enjoy the nice scenery, that alone makes it worthwhile.