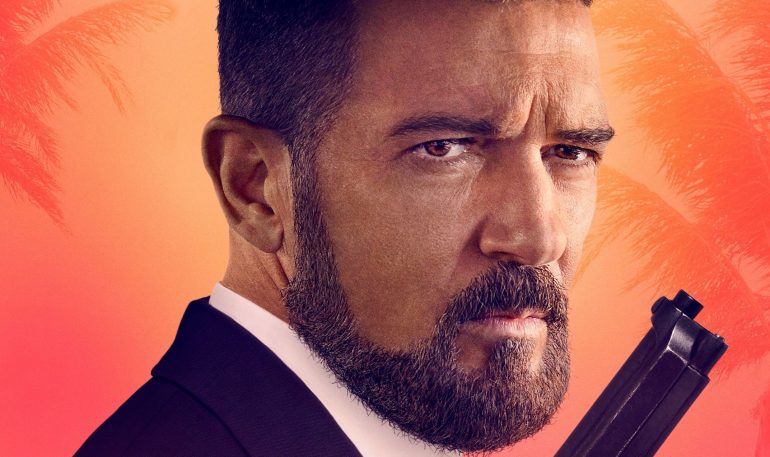 The Enforcer isn’t exactly spectacular but there is enough action to keep things moving (barely) and Antonio Banderas makes anything worth watching.

Plot: Miami’s top mob enforcer Cuda (Antonio Banderas) sacrifices it all to tear down the criminal organization he’s spent his whole life building up when he discovers his boss Estelle (Kate Bosworth) is putting a young runaway’s life in grave danger. Now he has one last chance to make up for his past and find redemption – both for himself and his family – before the mob hunts him down for his betrayal.

I sometimes forget what a fantastic actor Antonio Banderas is; no matter the quality of the product he never phones in a performance and he is one of the few reasons I look forward to next year’s Indiana Jones 5.

The Enforcer looked interesting from the trailers as a John Wick meets Taken tale and that’s really what it is; it never quite reaches the heights of either but as expected Banderas shines every moment he is on screen.

When we are first introduced to his character Cuda he is picking up new hire Stray (Mojean Aria) who is a skilled fighter looking for work. Their boss is the crimelord Estelle (Kate Bosworth) who tells Stray to go with Cuda to look for people who owe her money and punish them.

The first 10 minutes Banderas barely speaks but is utterly terrifying and unpredictable as Stray tries to make small talk; Cuda shoots a man in cold blood so we are under no illusions that he is a vicious killer Then he transforms in the next scene when he sees his daughter showing us his humanity and making us somehow still root for him. The performances all round are impressive and Kate Bosworth really is an underappreciated talent as she can be unrecognizable when she wants to be (see Homefront). I didn’t really care about Stray and we’re never really given a reason to like him but Mojean Aria still does the best he can with the material.

One day Cuda sees a young girl called Billie (Zolee Griggs) getting caught shoplifting and helps her as he begins some soul-searching; she ends up getting kidnapped and he eventually decides to rescue her. This displeases his boss and he will have to pay for betraying her. There aren’t really any surprises to the story so it isn’t as tense or action-packed as it could be; we do get multiple brutal fights and killings however, and the finale has Cuda going after Billie and destroying all in his path.

John Wick has a lot to answer for with recent action pictures as they try to capture the same style by using lots of neon lights and shadows; The Enforcer is no different and a lot of the film looks great but on the other hand it’s sometimes too dark to see what is happening.

Overall, The Enforcer my not be anything new and it lacks memorable action scenes but it has its moments and Antonio Banderas never disappoints.