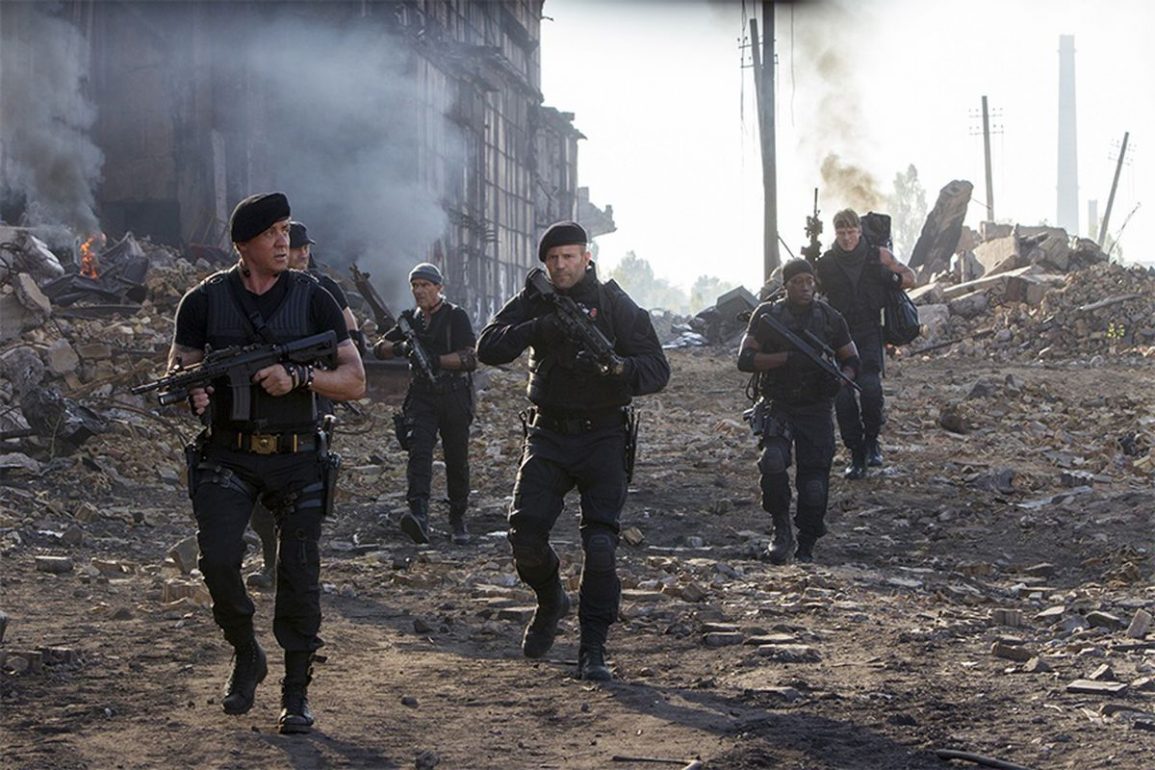 The third Expendables is the weakest yet feeling like it has been neutered for mass appeal but fails in living up to what Stallone promised fans. It’s not a terrible movie but it should have been so much better.

Plot: Barney and his team, known as “The Expendables”, come into conflict with ruthless arms dealer Conrad Stonebanks, the Expendables’ co-founder, who is determined to destroy the team.

Review: After months of waiting and whining about the PG-13 rating, it’s finally here; The Expendables 3 has arrived and the time has come to see if it’s as watered down as we all expected.

So does The Expendables franchise work as family friendly fare? Well… that’s debatable.

It certainly feels watered down and there are scenes which you just know are cut, but will hopefully make it to an Unrated DVD/Blu Ray in a few months.

The most noticeable scene is at the very start when the lads rescue Wesley Snipes from an armoured train. Cables are (probably) slicing the bad guys in half but it happens so fast that we don’t get to see and it was frustratingly bloodless. This happens with a lot of scenes where there are some obvious quick cuts just when things look like they’re about to get interesting.

Because of this there were no “fuck yeah!” moments in this movie. Remember in Part 1 when Terry Crews arrives with Omaya Kaboom and starts blowing the bad guys in half? We all laughed and cheered because it was so over the top and everything you want from this kind of action movie. Also the basketball court scene with Statham beating up the group of thugs in Part 1… there is nothing like that in this sadly and it all feels a bit safe.

Practically every scene from the trailers wasn’t in the film; Wesley doesn’t say “lots to digest”, Antonio doesn’t say “Courageous but insane!”, Harrison Ford doesn’t laugh hysterically in the helicopter and Stallone doesn’t say “Something wrong with the stairs?” which kinda sucked.

My other big problem was how uninteresting the young Expendables were; none of them had any real personality (aside from Rhonda) and I wanted them all to get killed so we could just get back to watching what we came to see: Arnold, Sly and co. kicking ass and taking names.  There is nowhere near enough time spent with our heroes and let’s face it, nobody is going to see this movie because they want to see a bunch of young non-action stars displaying zero personality. To underuse Dolph and Jet Li was a terrible shame and I was hoping we would get more of them in this movie; our heroes are basically sidelined for the younger cast which really wasn’t the best idea.

There is also a pacing lag in the mid-section as we waste time with Barney looking for a younger team; this would have been so much cooler if it was Dwayne Johnson, Donnie Yen or people who have actually been in action movies before. I also would have liked if more of the newcomers were on Gibson’s team; he had no main henchmen and it was basically him and a bunch of faceless extras vs. The Expendables.

Another thing which bugged me was the lack of hand to hand fight scenes; if you’re wanting to see Jet Li fight then you’ll be disappointed, he has even less screen time than in the last movie and the climactic fight between Gibson and Sly is even shorter than the JCVD fight from part 2.

Oh and if you thought the PG-13 rating would mean less crappy CGI then you’ll also be mistaken. There are some laughably bad special effects, like the helicopter blowing up behind Sly and Snipes and a few animated explosions.

It sounds as if I hated the movie but I just wanted to get the negatives out of the way first; yes it certainly feels like a lot has been cut but that doesn’t mean there aren’t some fun action scenes. The final 30 minutes is all out war with the team reunited and blowing things up like it’s going out of fashion; it’s essentially action movie nirvana. There is also a pretty huge bodycount in the finale and although we don’t see heads exploding, plenty of bad guys still get taken out by guns, knives and more.

The best part of the entire movie and frankly the Expendables series is the addition of Wesley Snipes who steals every scene he is in. He has the best lines and his character Doc even starts off as a bit creepy too. You aren’t sure if he can be trusted or not and his rivalry with Statham’s Lee Christmas provides a few nice touches of humour.

Speaking of the humour, I am pleased to say that script-wise The Expendables 3 is arguably the best of the series; there are very few lame nods and knowing humour. Arnie does indeed get to say “Get to the choppa!” but it works and the humour overall is genuinely entertaining. There is some clunky dialogue in places though, especially the scenes between Statham and Stallone which has never worked in all three films. It’s minimal though and didn’t reduce my enjoyment.

Despite being a little wooden, I loved how Harrison Ford can’t understand Jason Statham’s accent with lines like “What language is that?” and  “Stop mumbling!”.

Antonio Banderas was slightly annoying at first and is more Puss in Boots than Desperado but that’s only briefly until we find out why, then he becomes an awesome ass-kicker. He has a few choice lines with Rhonda Rousey too who is also easily the best of the younger newcomers.

Kellan Lutz definitely has potential as an action star and arguably has the most screen time of any of the young Expendables… but we’ll see.

Terry Crews has a smaller role and is essentially replaced by Snipes, which is the way it always should have been; he was just keeping the role warm until Snipes got out of jail.

Mel Gibson gives a barnstorming performance as the villainous Conrad Stonebanks and does the very best with what he is given. His finest hour is when he and Barney (Stallone) come face to face in a van. It’s intense as Hell and probably the best non-action moment of the film.

Brian Tyler once again scores the movie so we get the Expendables theme and some nice new pieces too proving that when it comes to action movie scores, Tyler is the best in the business these days.

If this is the grand finale then it’s a decent place to stop and wraps everything up, but I still would like another harder movie with more REAL action stars added to the cast. Johnson and Donnie Yen for Part 4 please!

Overall, despite feeling very much watered down and spending too much time with the younger, less interesting newcomers The Expendables 3 is a fun ride with Wesley Snipes and Mel Gibson on fantastic form. There’s an overuse of CGI and a pacing lull in the mid-section but the final half hour is action movie Heaven. I just hope we get the Unrated Cut on DVD and see the film as it was meant to be seen.