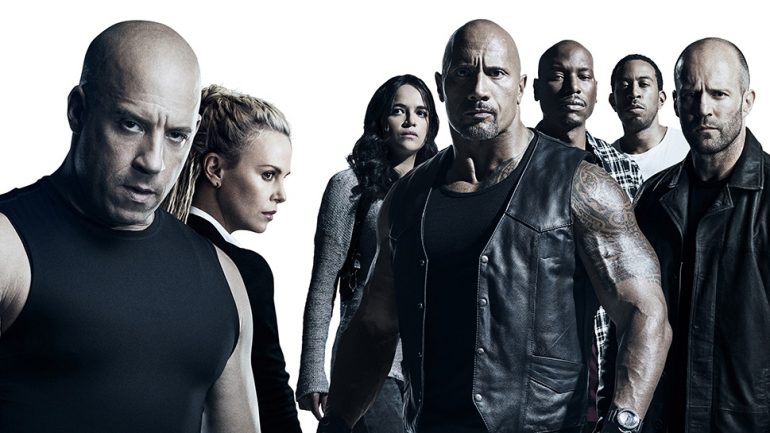 The Fate of the Furious is pretty much what you’d expect; it’s noisy and silly but it’s an absolute blast with Statham, Theron and Mirren eating up the screen.

Plot: With Dom and Letty married, Brian and Mia retired and the rest of the crew exonerated, the globe-trotting team has found some semblance of a normal life. They soon face an unexpected challenge when a mysterious woman named Cipher forces Dom to betray them all. Now, they must unite to bring home the man who made them a family and stop her from unleashing chaos on a grand scale.

Review: It’s hard to believe this series started out as a small movie about LA street racers and has now developed into a James Bond style epic where all logic and reason has been flushed down the toilet. We knew from the trailers this was going to be dumb (just as the other movies have been) but there really are a lot of head scratching moments in this entry.

It’s kind of difficult to review a movie like this as frankly you could tear it apart critically but I’m going to go over what I loved about the film. Charlize Theron is easily the best villain of the entire series; she’s a hateful monster and you’re practically swearing at the screen every moment she sneers her way through every scene. She’s a fantastic addition to the franchise and I still say they should have called it Fast & Furiosa. Helen Mirren is also a welcome newcomer who plays Deckard Shaw’s mum; she has some choice lines and it really is the ladies who practically steal this movie… aside from of course, one man.

They could make a movie and call it “Stath on a Plane” and I’d watch the shit out of it; as expected Jason Statham is the coolest person on-screen and the prison riot and his (soon to be classic) scene on the plane are easily the highlights of the entire movie. He brings more humour to this entry and has some of the best moments but on the flip side of that, Dom’s team really are all very forgiving of the man who killed Han in a previous film.

Scott Eastwood is having quite the career and I really enjoyed that he is a stickler for the rules and gets zero respect from anyone else in the crew. Kurt Russell just looks like he’s having a great time even if he doesn’t really have that much to do.

The action in this entry is very imaginative and for the most part pretty slick but there is more CGI than I’d like to see and it not only jumps the shark but it jumps all the sharks for the overblown submarine finale. In reality each character would have died about 20 times but this isn’t new to this franchise; they are all invincible superheroes and for the most part you never really feel like any of them are in real danger.

I also still can’t really stand Tyrese’s character Roman who is still a screaming little bitch who I wish they’d kill off; in the second movie I could swear he was a tougher character and far more interesting but then Ludacris’ character is now an IT wiz. Wasn’t he a mechanic in the second movie?

I loved the idea that Dom turns against his team and what the motivation was behind it which provided the most dramatic moments of what is otherwise a Saturday morning cartoon.

The story has a few twists and turns I didn’t see coming so I’d say it’s definitely the best entry since number 5 but if you don’t like the ridiculous way this series has evolved over the years then this probably won’t win you over.

Overall, The Fate of the Furious is pretty much what you’d expect; it’s noisy and silly but it’s an absolute blast with Statham, Theron and Mirren eating up the screen.