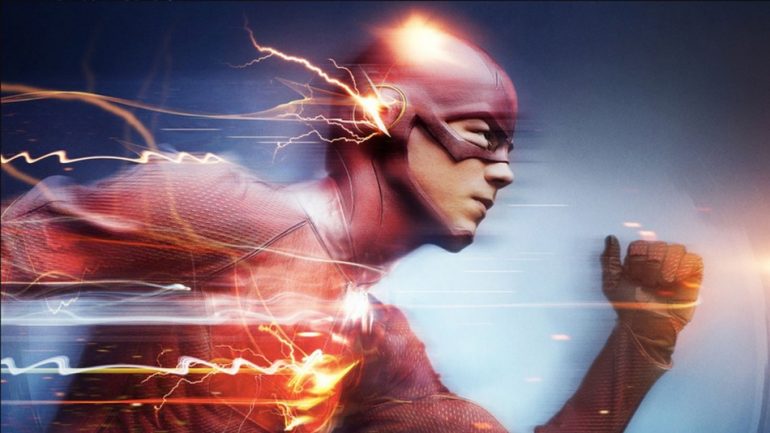 The Flash has enough humour and action to be one of the most entertaining superhero shows on TV.

Plot: Barry Allen is a Central City police forensic scientist with a reasonably happy life, despite the childhood trauma of a mysterious red and yellow being killing his mother and framing his father. All that changes when a massive particle accelerator accident leads to Barry being struck by lightning in his lab. Coming out of coma nine months later, Barry and his new friends at STAR labs find that he now has the ability to move at superhuman speed. Furthermore, Barry learns that he is but one of many affected by that event, most of whom are using their powers for evil. Determined to make a difference, Barry dedicates his life to fighting such threats, as The Flash. While he gains allies he never expected, there are also secret forces determined to aid and manipulate him for their own agenda.

Review: The pilot to The Flash was off to a shaky start as it came across as a rather generic origin story (and I’m still not convinced about the costume), but as the show went on it has become everything that Arrow is not: huge fun. While Arrow was so busy being po-faced and dull this season, The Flash literally ran away with the best script, over the top villains and most importantly it didn’t apologise for it. It embraced the sci-fi nature of the characters and really went to town with some of the craziest villains you’ll ever see, but it was never less than massively entertaining.

Grant Gustin makes Barry Allen incredibly likeable but it’s the supporting cast who also shine; whereas the women in Arrow are mostly annoying and don’t feel like real people, Iris is lovely and believable and Candice Patton is rather gorgeous too. She comes across as a strong female character without ever being annoying or whiny.

There are so many memorable villains on the show too but the best has to be Captain Cold, played by Wentworth Miller. I don’t think I’ve ever seen anyone so clearly enjoy themselves in a role and he has to be one of the best villains since Loki. When he teams up with Dominic Purcell’s Heat Wave, it’s just the icing on the cake.

As mentioned in my review for Season 3 of Arrow last week, the best moments are the crossover episodes with The Arrow as it feels like a mini Justice League movie; we even get a Flash vs. Arrow episode which, although predictable still manages to be everything you’d want to see in a crosover.

Tom Cavanagh is another great find as Harrison Wells; you aren’t quite sure what his motivation is or if he is completely evil but you just know something isn’t right about him from the very start. He has a way of looking incredibly sinister one minute and then he’s your best pal the next.

We also had a classic episode featuring the return of Mark Hamill as The Trickster which was arguably my favourite episode of the show so far.

Carlos Valdes provides the comic relief who is for once actually funny; the running joke of him coming up with the ridiculous names of the villains remains humorous and prevents the series from ever getting too serious.

I was worried when the time travel element was introduced as I thought the show was going to be a cop out and undo everything that had happened before but that wasn’t the case and it has proven to be the most satisfying and entertaining of all the superhero shows on television.

Speaking of which, there is plenty of superhero action and one of the more recent episodes has our hero battling multiple Meta-Humans at once which is pure comic book greatness. The special effects are believable for the most part and The Flash has become one of my favourite superheroes.

Nods to the original show are welcomed, including some nice casting like John Wesley Shipp as Barry’s dad or Amanda Pays as Tina McGee; she played the same character in the 90’s TV series so this was a nice and unexpected touch.

Overall, despite a rather bland pilot episode The Flash really picked up the pace and is now one of the best shows on television.