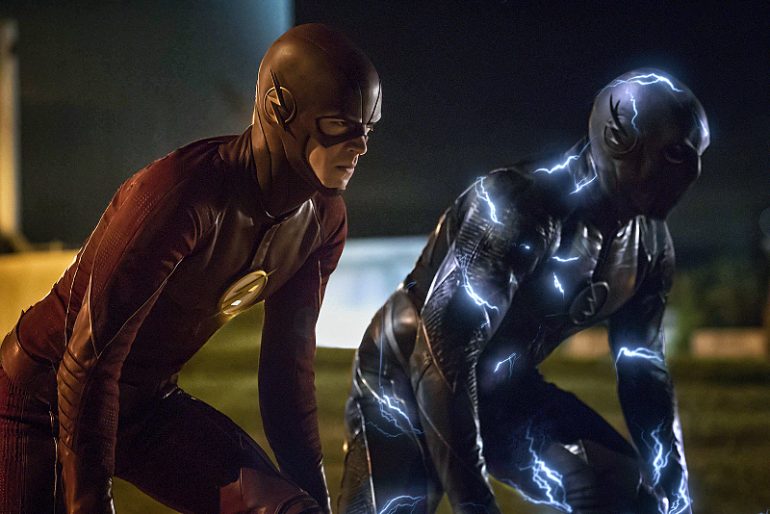 Season 2 of The Flash is more of the same but despite its flaws it manages to be a good time.

Plot: The Flash returns in Season 2 and this time he faces off against his most deadly adversary who wants to take everything from him.

Review: (Spoilers Ahead!) The Flash once again speeds ahead of other cable superhero shows (Netflix’s Daredevil is still the king) in this second season with a cast who are up for anything no matter how silly.

Even when faced against King Shark and other bizarre villains Grant Gustin still manages to be one of the best actors on television; he brings such heart to the role of Barry who is a true hero in every sense of the word.

He is willing sacrifice his own powers and even his life for family but even that isn’t enough for new villain Zoom (Teddy Sears) who basically wants to destroy the Flash, his friends and even the multiverse.

When Zoom is in full costume he is voiced by the legendary Tony Todd (Candyman) who has one of the best voices in the business and is incredibly intimidating. I found though that once he revealed his face he lost that threat because Teddy Sears just looks like a nice guy and can’t really hide it. He did a fine job but he just had a bit too soft a face to be truly menacing.

Keiynan Lonsdale was a welcome addition as Wally West, Joe’s long lost son who we know has an interesting future ahead of him. The cast in general are all at the top of their game and I just love the sparring between Cisco and Wells which provides many of the season’s comic highlights.

This is one of the rare superhero shows that manages to be exciting, funny and genuinely moving; the scene where Barry is in the Speed Force with his late mother is heartbreaking and even the manliest of men will have a quivering lip.

Some of the CGI throughout the series isn’t amazing but for the most part it’s well done and there is plenty of action all the way through.

My personal character highlight was having Mark Hamill return as The Trickster which was always one of my favourite roles of his and when he played him in the 90’s Flash series it was perfect practice for his future as (arguably) the best Joker ever.

I do find that having the one villain for an entire season does get a bit boring though and hearing Barry say “I’m not fast enough” gets tedious quite quickly so I’m glad this story has been wrapped up. Now after the finale it will be interesting to see what happens next…

Overall, The Flash: Season 2 is hugely enjoyable superhero fun with great performances from the cast and despite a few flaws it never fails to entertain.