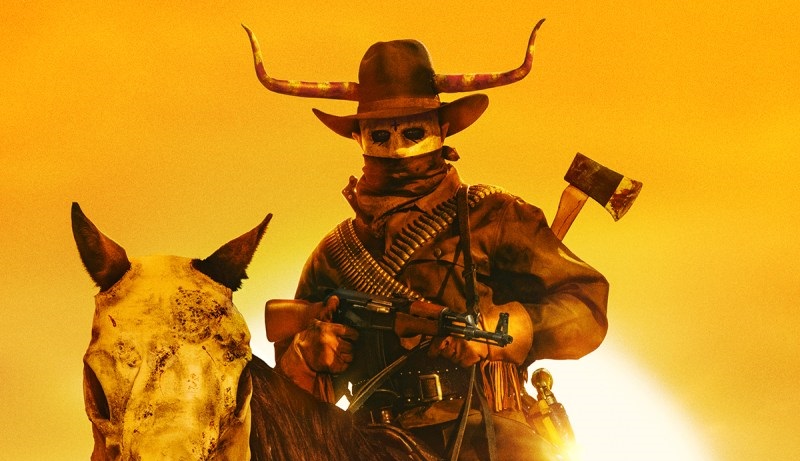 The Forever Purge is as subtle as a sledgehammer but it still makes for an intense watch with challenging characters and some satisfying kills. A little too much takes place in the dark making it hard to see what’s happening but I knew what I was in for and enjoyed it for what it is.

Plot: Adela and her husband, Juan, live in Texas, where he works as a ranch hand for the wealthy Tucker family. Juan impresses the Tucker patriarch, Caleb, but that fuels the jealous anger of his son, Dylan. On the morning after the Purge, a masked gang of killers attacks the Tuckers, forcing both families to band together and fight back as the country spirals into chaos.

Review: I keep seeing negative reviews but I really enjoy the Purge movies if indeed “enjoy” is the right word; Anarchy is my favourite entry as I am a big fan of Frank Grillo but The Forever Purge is still entertaining.

These movies capitalize on the anxiety of our times and The Forever Purge focuses on the divide in America regarding illegal immigration, racism and rich vs. poor. Sadly, there isn’t anything in The Forever Purge that is unbelievable and after everything that has happened over the past few years if someone told me The Purge was going to be a real thing I wouldn’t be surprised.

Josh Lucas makes for a challenging protagonist as Dylan (you sonofabitch) Tucker who thinks different races shouldn’t mix but when the Ever After Purge begins he teams up with his Mexican ranch hands to escape the warzone that America has become. Spoiler alert – By the end of course he realizes the error of his ways but a lot of craziness has to happen first.

The Purge is such a hellish concept and I wondered if they were ever going to cover what would happen when certain people didn’t stop purging after the allotted 12 hours where all crime is legal and that’s what this film is all about.  It creates a truly apocalyptic atmosphere where nowhere is safe and violence can happen at any time. There are some good gory moments and watching Dylan take out a Purger with a sledgehammer was awesome although there are more violent entries in this series.

Some of the politics may be a little heavy handed but that’s what this franchise has always been. The biggest flaw with this movie for me was how hard it was to see what was going on at times; maybe my TV is dying but too much takes place in the dark which got a little frustrating.

The final shoot-out in the desert was a highlight and watching the crazed purgers getting their comeuppance is always satisfying.

Although this is a fictitious tale it can be hard to separate it from reality when there is nothing subtle about the message but as someone who isn’t American I just try to take it as an action thriller.

The music score was ominous sounding incorporating that haunting Purge alarm and it added to the intensity; I really liked it but I doubt I would listen to it outside of the movie.

Overall, The Forever Purge is everything you would expect from a Purge movie so if you haven’t enjoyed the other entries then this won’t win you over but I liked the characters and conflicts and there is a decent bodycount.