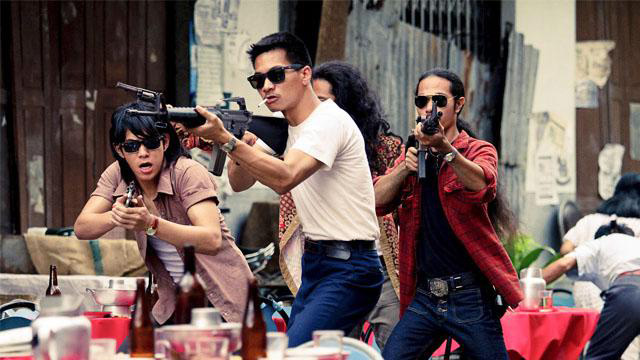 The Gangster doesn’t spend enough time focusing on its protagonist but there’s enough violence and memorable characters to be worth checking out.

Plot: Bangkok in the 1950s. Jod and his friend Daeng are fearless aspiring gangsters. Their ability in street fight have them hired by a local gang and admired by all. But as years go by, this violent lifestyle is more and more difficult for Jod. He tries to avoid violence when he can but is soon put aside by more violent youngsters. When some of his friends die in internal wars, he decides to take his revenge on the gang.

Review: I’m a big fan of the gangster genre so when I picked this up on DVD a few weeks ago it certainly looked like my kind of movie… and I was right. The Gangster is a bit of a gem with some pretty brutal violence in parts and isn’t an easy watch, but being the sick weirdo that I am I thoroughly enjoyed every second of it.

Krisada Sukosol Clapp had real screen presence as Jod who also looked remarkably like Christian Bale at times. He was incredibly charismatic but I think one of the major flaws of the film was that not enough focus was paid to him. There were a few too many characters and the first half of the movie is just lots of different gang members doing awful things to other people.

Despite that though the second half has some interesting character arcs and I liked how Jod was filled with regret for accidentally killing a woman; he struggles to do what he’s always done but can’t really escape who he is.

The acting in general is excellent and paints a violent world where everyone is fighting for their piece of the pie.

I liked the 50’s style music and the way everyone looked; they were all fans of Elvis so they had that 50’s “greaser” look.

Overall, there’s not much else to say really; The Gangster does exactly what you’d expect and despite a lack of focus on a particular character it still has plenty of violence and a pretty fast pace too.