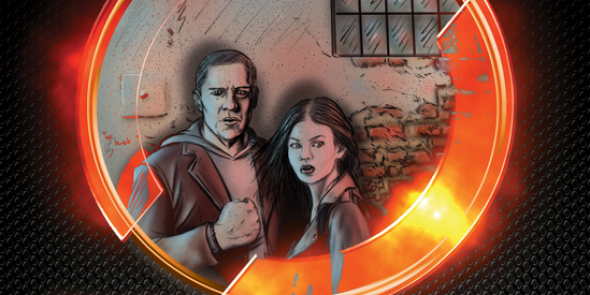 The Genesis Exiles is thrilling and filled with action but never loses sight of its characters and heart. Definitely worth checking out.

Plot: Seized as a child, Captain Ben Torres was raised to serve the government as one of the Evolutionary Children, a clandestine team with extraordinary powers formed to fight terrorists and other extraordinary threats. Cold and methodical, he operates without sanction as an ideal soldier and powerful force against enemies of the state. When new teammate Maggie Stanley breaks through his facade of control, and challenges his role as Captain, the stoic Torres finds himself at war with needs he never knew he had, for understanding, for affection, and for love. Despite an express prohibition from their shared masters, including Maggie’s father and head of the group Deacon, the two form an affair and potentially doomed relationship, helpless to their passions for one another. Discovered by a teammate and blackmailed, they’re framed and forced to flee for their lives, now officially fugitives and terrorist threats. Condemned to death by their superiors, Ben and Maggie must flee for their lives relying on their training and enhanced abilities to ensure their own survival. Hoping to clear their name and keep their relationship in tact, they are now pursued by every means the government has, including their former teammates, once their surrogate family.

Review: I think I am officially the world’s slowest reader as it usually takes me like a year to read 1 book, however, I have finally completed reading The Genesis Exiles from author Felix Vasquez Jr. and I’m pleased to say that it’s genuinely thrilling and action-packed with well developed characters who we care about.

The story wastes no time in getting going and the first few pages help us get to know and understand our protagonists. Of all the characters I’d have to say that Ben was my favourite; he clearly adores Maggie and the fact that he is willing to literally give up everything just to be with her made him a true blue hero.

Maggie is crazy about him too and refuses to let him go when he decides it’s time to either tell Deacon (her father) that they are together or they will their separate ways. There’s a desperation to their relationship which keeps it engaging and you so want them to escape the mess they get into… and boy, what a mess.

This is all thanks to Lizzie, one of the Genesis Children who decides to squeal on the two lovebirds and betray them; I don’t think I’ve ever hated a character on a page so much in my life. It’s funny how mere words on a page can make you feel such strong emotions whether they are negative or positive…

When she tells Deacon what’s been going on the two lovers go on the run with the military and their former family after their blood.

Vasquez Jr. has an immediately appealing writing style and when penning the action scenes there is an energy to them which shows that he was just as excited writing them as we are reading them. I used to try my hand at writing and when doing action sequences it does get your adrenaline going and it really jumped off the page here.

This would make for an excellent movie or even TV series as the characters are so engaging that you want to spend more time with them. No matter what chaos is going on during the action, it never loses its heart so you remain enthralled until the end.

In terms of flaws, I noticed that there were words which would get repeated often, especially “grumbled” which cropped up quite a lot. Not a major problem and it didn’t take away from the story.

Overall, The Genesis Exiles is thrilling and filled with action but never loses sight of its characters and heart. Definitely worth checking out.