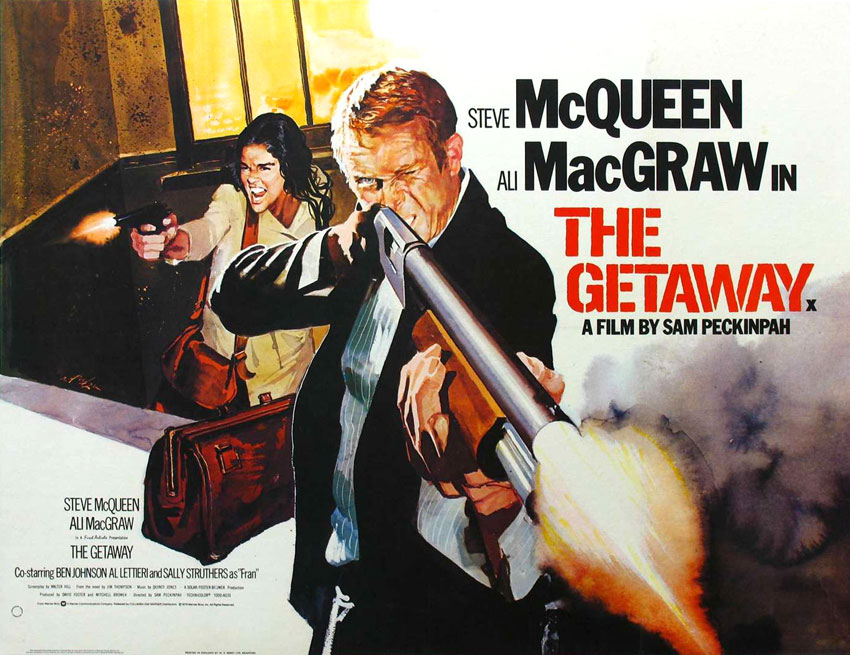 The Getaway is a little slow to get going and Doc McCoy is a difficult character to root for but the story is engaging and there is enough action to keep you entertained.

Plot: Doc McCoy has been granted parole. The catch is that Sheriff Beynon expects a small favor from McCoy for his generosity: robbing another bank! Beynon does not really intend to let McCoy walk away after the heist and neither does co-robber Rudy Butler, but stopping Doc proves a trifle difficult.

Review: Steve McQueen plays one of his most challenging characters in The Getaway; Doc McCoy is as always cool as ice, however he isn’t exactly a nice guy but that makes him all the more believable. He is a criminal after all and he has no problem being ruthless. His relationship with his wife Carol (Ali MacGraw) isn’t quite as romantic as you might think either; she ended up sleeping with a prison warden in order to get Doc out of prison.

It worked but Doc finds it difficult to trust her and when he first finds out what she did he slaps her about which is one of the toughest scenes to watch. Their relationship feels more desperate rather than filled with love as they try to escape from the law and their fellow thieves. I’m not entirely sure MacGraw was the greatest actress of all time but she does OK and Carol is not an easy role to pull off.

Al Lettieri is suitably menacing as the rather insane thief Rudy who kidnaps a woman (Sally Struthers) and her husband while he chases after Doc and Carol. There’s a scene in a car which starts off as a lighthearted food fight but quickly descends into Lettieri being rather scary which is one of his finest moments.

It’s a little slow to get going but the one element which really stood out was the use of sound, especially during the first 20 minutes while Doc is going stir crazy stuck in prison.

As the couple travel across country trying to escape they find themselves hiding in garbage trucks and it all climaxes in an impressive shoot-out in a hotel.

As with the majority of 70’s films The Getaway is rather nihilistic; you aren’t sure whether they deserve to get away because they are in fact criminals and deserve to be punished. Nobody is really good and by the finale you’re wondering if it is a happy ending or not.

Doc McCoy is suitably badass when he needs to be though and when he catches up with the guy on the train who stole their case he beats the crap out of him without mercy.

The script from Walter Hill feels authentic where the characters feel like real people forced to make desperate decisions in order to survive.

Overall, The Getaway is a little slow to get going and Doc McCoy is a difficult character to root for but the story is engaging and there is enough action to keep you entertained.