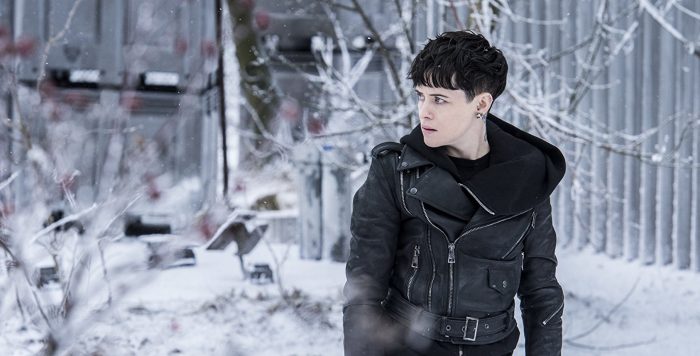 The Girl in the Spider’s Web doesn’t break any new ground but it has enough action and thrills to be worth watching on the big screen and Claire Foy is fantastic as Lisbeth.

Plot: A new Dragon Tattoo story comes to the screen starring Claire Foy (“The Crown”) as Lisbeth Salander, the fierce, outcast vigilante defender from the acclaimed Millennium book series created by Stieg Larsson, in The Girl in the Spider’s Web.

Review: It’s been a while since I watched the Millennium Trilogy with Noomi Rapace but I remember it being very well made if decidedly unpleasant to sit through. There were rape scenes, disturbing violence towards women and it all just left a bitter taste in my mouth. One element I have always loved however was the character of Lisbeth Salander who is a survivor in every sense of the word.

That poor girl has had a terrible existence and anyone who has seen the previous movies or read the books knows what I’m talking about. Noomi Rapace completely embodied Lisbeth giving her a coldness yet still keeping her vulnerable and sympathetic after all the abuse she has endured in her life.

This latest adaptation entitled The Girl in the Spider’s Web has English actress Claire Foy step into the role of Lisbeth and she was a revelation and completely unrecognizable but still feeling like the character we know so well.

Spider’s Web is thankfully a lot less rapey than the previous movies but it still has shocking moments which are designed to make you uncomfortable. The opening sequence is beautifully set up as a man stands in a fancy looking kitchen pouring a drink apologizing for the things he said to someone off screen. The camera slowly moves along the counter top and at the other side his wife is revealed lying bloody on the floor after he clearly has beaten her up. This is once again not exactly a laugh riot but sets the tone and welcomes us back into the frankly awful world Lisbeth inhabits.

Reviews have been rather scathing of this movie and I can understand why as the story is rather familiar and we’ve seen it before but it is easily the most action-packed entry to the series with plenty of fights, chases and explosions. Lisbeth remains as cold and aloof as ever but we get a better look at her backstory and find out her father was abusive and her sister seemed to enjoy it. It’s all very sordid and you’ll still want a shower after watching but if you don’t fancy watching in on the big screen I would recommend checking it out when it hits Netflix as it is well paced with terrific performances all round.

I found myself smiling regularly throughout at some of the tech with Lisbeth seemingly having cameras everywhere and updating computers within seconds; everyone knows fine well that we need regular Windows updates so our computers have to reboot and are never that reliable or fast. This is movie logic though and is something I’m sure we’re all used to by now.

Director Fede Alvarez (Don’t Breathe) has a nice visual style giving Spider’s Web the griminess required for it to feel like the other Dragon Tattoo movies but still being big and glossy enough to be a female 007 style blockbuster.

It rarely stops for a second with some well-conceived action scenes that are never less than thrilling. A fight during the finale has Lisbeth wearing a gas mask (due to gas… obviously) in her childhood home battling off attackers with an electric cattle prod which has just the right amount of desperation to be the action highlight of the movie.

Overall, The Girl in the Spider’s Web is less disturbing than previous entries in this series feeling more like a formulaic blockbuster but that’s no bad thing as it has some impressive action and Claire Foy gives a star making turn as Lisbeth.