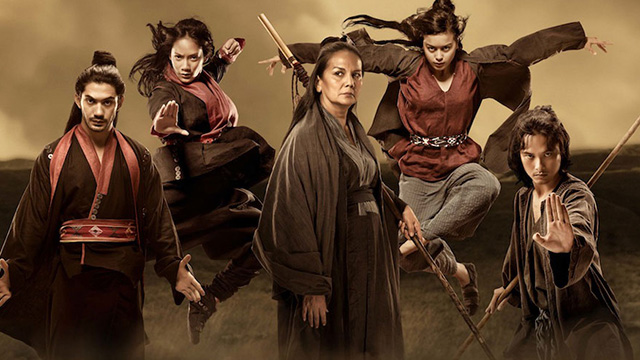 The Golden Cane Warrior may not have the most ferocious fight scenes ever and the lead is a bit bland but it’s still massively watchable.

Plot: When an aging martial arts master chooses two of her meeker students to be her successors, two older students steal her mystical cane and pursue their rivals.

Review: Indonesian martial arts cinema continues to dazzle in this beautifully shot old-school kung fu flick. The story isn’t anything new; martial arts students betray their master and the good student vows revenge so nothing ground breaking there but the execution is first rate.

We get some stunning training montages in front of sunsets and the landscapes are breathtaking; this might seem strange to say but there is almost a quiet peace to it all.

Although the fight scenes aren’t as memorable as say Ong Bak, they are well done and the performances by the cast are all believable.

Eva Celia Latjuba who plays Dara isn’t exactly Captain Personality though so you don’t really care what happens to her.

Aria Kusumah nearly steals the show as the honourable Angin; a child who has been raised by his Guru/master and he was easily the best character in it.

Reza Rahadian (Biru) and Tara Basro (Gerhana) are two suitably nasty treacherous villains who will stop at nothing to gain the ultimate power and restore the great name of The Golden Cane House.

It’s an hour and 50 minutes long but it never drags; the spectacular visuals kept my eyes wide open and I felt like I didn’t want to miss a single sumptuous visual.

The score was also suitably epic and quite beautiful really helping to lose you in the story.

Overall, The Golden Cane Warrior may not have the most ferocious fight scenes ever and the lead is a bit bland but it’s still massively watchable.