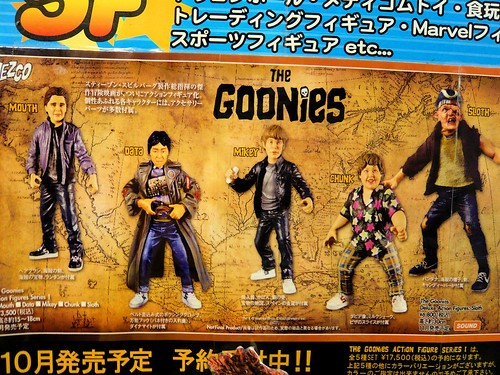 The Goonies throwback: An 80s classic with an ongoing cultural legacy

The 80s was a remarkable decade for cult cinema. You had massive hits from all genres. There were classic family titles such as Honey I Shrunk The Kids and Uncle Buck. Then we all fell in love with action movies such as Top Gun, Predator and Robocop. One of the best-loved movies was The Goonies. It’s a story about a group of young misfits from Oregon trying to save their home. People adored the characters, and it was quickly a Box Office hit. The popularity has stood the test of time and The Goonies has retained a foothold within popular culture. This article will explore some examples of how this has happened and why it remains so popular.

Recreate the adventures of Mikey and his friends

The iGaming world has often turned to cinema and TV when looking for new and innovative ideas for virtual slot machines. There are some perhaps more obvious choices from the TV with titles based around the world of game shows such as Who Wants to Be a Millionaire and Deal or No Dea. If you look closer at the movie world, PinkCasino.co.uk also offer a slot machine based on a focal point of 80s popular culture. In The Goonies online slot game, you will see several signs and symbols that you have probably seen a thousand times. Given the popularity, it is perhaps surprising that it hasn’t made much of a wider inroad into the video game industry.

Of course, The Goonies cultural impact went far beyond the virtual world. Upon release, the lovable rogues of the movie featured on all types of merchandise. Spend time searching for merchandise, and you will discover a treasure trove of items of all kinds. There are Etsy and eBay sellers galore. If you look on zavvi.com, you will see a delightful ‘Hey You Guys’ mug. That is a must-buy for any fans who have remained obsessed.

What other movies had a similar impact and why?

There are so many that come to find. The Breakfast Club became a massive hit, and similar to The Goonies, it has remained popular with a newer generation of audiences. Within a short period after its initial release, the soundtrack to the movie was released as an album. As we spoke about in the introduction, this was also a decade that brought Top Gun, Predator and Robocop. Depending on who you speak to, most would argue that they have stood the test of time and gained a life outside the cinema.

So the big question is, why has 80s cinema retained a place in the hearts and minds of so many? The video above explores some of this obsession with an article on TheGuardian.com pointing out that ultimately, they are fun. Movie and industry might not see them as the best cinema has to offer, but they have huge charm. It’s hard to see any decade in the future having such a weird and wonderful impact on popular culture.