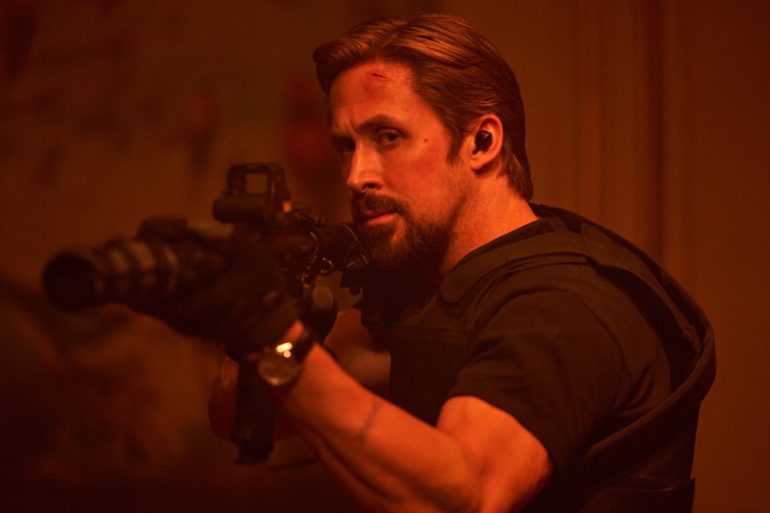 Considering the talent and the budget I was expecting more from The Gray Man; Chris Evans overdoes it but still provides a lot of the humour and the shoot-out in Prague is decent but its generally let down by an overuse of crappy visual effects, a plodding story that lacks excitement and it seems to go on forever. I think I’ll just go watch Commando again instead.

Plot: When the CIA’s top asset — his identity known to no one — uncovers agency secrets, he triggers a global hunt by assassins set loose by his ex-colleague.

Review: I’d been looking forward to The Gray Man for a while mostly due to the impressive cast that includes Ryan Gosling, Chris Evans, Ana De Armas and Billy Bob Thornton. I’m not familiar with the source material it’s based on so I’m just judging this as a film in its own right.

The cast all seem to be enjoying themselves with Ryan Gosling at his stoic best as Six and Chris Evans chewing the scenery as the sociopathic Lloyd. There is a lot of rapid-fire dialogue which is at times funny but starts to grate after a short period of time.

The shoot-out out on the streets of Prague is also one of the action highlights but to be honest aside from that I mostly couldn’t stand this film and it’s yet another clunker for Netflix.

It apparently had a budget of $200 million which is hard to believe as the visual effects weren’t all that impressive with distracting things like an overuse of smoke and debris during nearly all the action scenes, too much editing and distracting drone camerawork which started off cool but once again it got old very quickly. I nearly turned the film off after the plane scene as it became incomprehensible and just looked fake so I never believed any of it was happening.

I had no emotional involvement in the story either and I know this is based on a book but everyone feels like a cartoon character and there are no surprises at all. Even Ana De Armas who was the best thing about No Time to Die was a little bland here and after 2 very long hours we don’t even get a proper ending with it open for a sequel which I have no desire to ever watch.

It’s funny if you look back at a film like Commando which is similar in how it has a one-man army protecting a little girl from bad guys which is mostly what happens here except that managed to tell a better story and have better action scenes for a fraction of the budget and it’s only 90 minutes.

The Gray Man’s pacing drags far too much and there is no reason for it to be as long as it is; the jarring flashback with Six and the girl could have easily been chopped as it killed the pacing.

Overall, The Gray Man is a big disappointment considering the talent involved but aside from a few impressive action scenes and scenery chewing moments from Chris Evans it’s far too long and has an over-reliance on flashy editing taking us out of the majority of action scenes. It’s maybe worth watching once but like practically every other Netflix film I have no intention of ever sitting through it again.