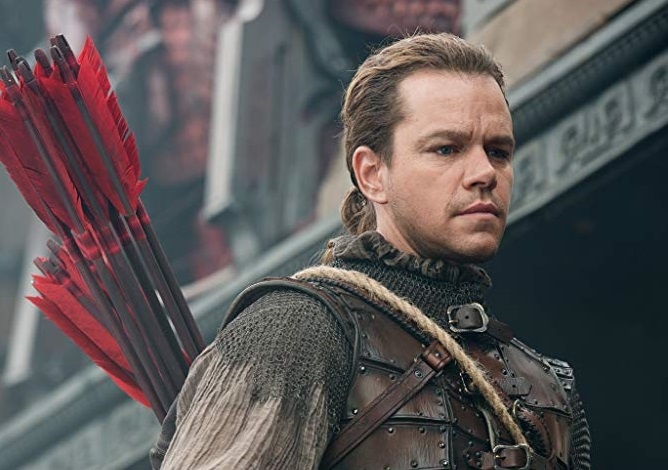 The Great Wall is generic stuff with one note characters who you’ll never really feel anything for but if you treat it as a disposable B movie to watch on a weekend then you might just have some fun.

Plot: When a mercenary warrior (Matt Damon) is imprisoned within the Great Wall, he discovers the mystery behind one of the greatest wonders of the world. As wave after wave of marauding beasts besiege the massive structure, his quest for fortune turns into a journey toward heroism as he joins a huge army of elite warriors to confront the unimaginable and seemingly unstoppable force.

Review: I avoided watching The Great Wall for the longest time as I’d heard nothing but bad reviews for it and the trailer didn’t exactly sell me either. As I didn’t leave my apartment all weekend yes, you guessed it – I saw it on Netflix.

For some reason I managed to miss that it was directed by Zhang Yimou (Shadow) otherwise I probably would have watched it sooner as I consider him one of the most visual storytellers out there today.

The Great Wall may not be one of his better movies but it wasn’t quite as horrendous as expected and had a few things going for it, namely how it was shot with Yimou using his usual sumptuous colour palette with blues, reds and greens for the various divisions of soldiers. It looks beautiful with imaginative costumes, big battle scenes and it moves along at a tight pace.

Where the film falls down is the pedestrian story which really is pretty join the dots stuff and very predictable, not giving us any surprises. Also, what accent is Matt Damon trying in this movie? They basically said “European” so it was rather non-descript; it wasn’t a terrible accent but the fact I couldn’t tell where he was from bothered me a little.

His character William is a former thief (and killer) but when he and his comrade Tovar (Pedro Pascal) are taken prisoner by a group of Chinese warriors William discovers his inner hero while Tovar wants nothing more than to escape. They are rather bland as characters but Matt Damon was ruined for me thanks to Team America so I can’t really take him seriously any more. He has zero chemistry with Commander Lin Mae (Tian Jing) so their potential love story never convinces; nothing happens between them anyway but it was hinted at.

Willem Defoe was really just there to push the story forward and get Tovar to help him escape the fortress but literally any actor could have played this role.

The selling point for this movie was Andy Lau who I will watch in anything but even he was in a rather thankless role as Strategist Wang and gets little in the way of action scenes.

What of The Great Wall’s antagonists? A group of creatures called Tao Tei are led by a Queen and communicate using vibrations and are essentially a hive mind. Kill the queen. Win the war. Although CG they are well rendered and quite nasty looking monsters that do the job.

There is a scene where a certain character dies and we see their funeral which involves the lighting of hundreds of Chinese lanterns which float off into the sky and it’s a beautiful visual and pure Zhang Yimou.

Despite all the lavish visuals and big set-pieces this is at its heart a B movie which is a genre I certainly have a soft spot for and is the type of fantasy action adventure I enjoy on a Saturday afternoon.

The music score has some fantastic percussion which is used in the movie by the army to communicate what strategy to use next and is one of the best aspects of The Great Wall. It also has some epic choirs during the bigger battles which work well.

Overall, The Great Wall isn’t the trainwreck I expected; the characters are all fluffy and forgettable and Damon’s accent is a bit weird but the nice visuals and monster action make it a diverting if unspectacular watch.