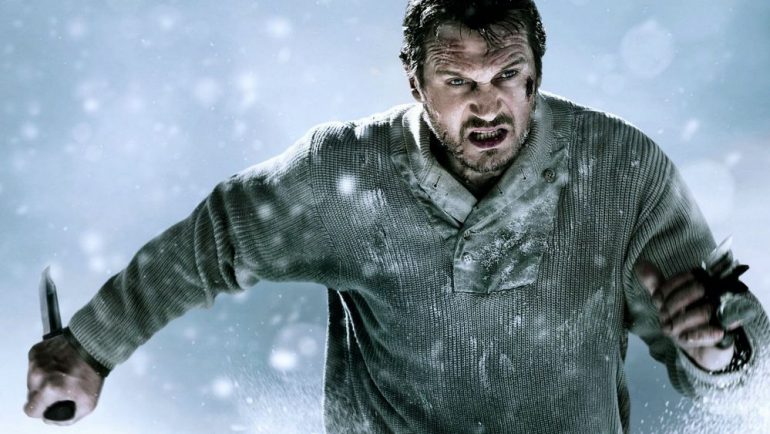 I’ve always loved movies about surviving in the wilderness as there’s something primal about man vs. nature. I thought today I would look at two survival movie classics The Grey and The Edge to see which is better.

Both movies involve a few men surviving a plane crash and end up in the wilderness; they find out that although nature can be cruel, it’s man who is the real bad guy.

Plot: Following a grueling five-week shift at an Alaskan oil refinery, workers led by sharpshooter John Ottway (Liam Neeson) are flying home for a much-needed vacation. A brutal storm causes their plane to crash in the frozen wilderness, and only eight men (Frank Grillo, Dermot Mulroney), including Ottway, survive. As they trek southward toward civilization and safety, Ottway and his companions must battle mortal injuries, the icy elements, and a pack of hungry wolves.

Liam Neeson stars in this pretty depressing movie about survivors of a plane crash trying to escape from hungry wolves and the shadow of death, which looms around every corner. The movie paints a pretty bleak outlook on life essentially saying that hope and faith are pointless.

It still manages to be an excellent film though, with great performances from the entire cast and Neeson on top form. The wolves are almost demonic, never stopping chasing after the survivors and the movie is harrowing and tense. It has a great score by Marc Streitenfeld too, which like the rest of the movie is pretty depressing. The plane crash scene is incredibly well done and I remember people left the cinema because it was too intense for them.

It has a pretty open ending which I still can’t decide if I like or not. After such a tough 2 hours, it would be nice to be given some chink of light at the end.

Plot: The plane carrying wealthy Charles Morse (Anthony Hopkins) crashes down in the Alaskan wilderness. Together with the two other passengers, photographer Robert Green (Alec Baldwin) and assistant Stephen (Harold Perrineau), Charles devises a plan to help them reach civilization. However, his biggest obstacle might not be the elements, or even the Kodiak bear stalking them — it could be Robert, whom Charles has reason to believe is having an affair with his wife and would not mind seeing him dead.

Anthony Hopkins and Alex Baldwin star in this underrated survival tale about two love rivals who survive a plane crash and are forced to work together to survive. This time there are no wolves but there is one big mean ole bear who will stop at nothing until he as a Baldwin/Hopkins sandwich. Like The Grey, it’s incredibly tense and the bear is pretty nasty. There is some really beautiful scenery and the wistful score by the late, great Jerry Goldsmith only helps in creating an epic scope. It has a bit more action than The Grey and also has a more uplifting ending where SOMEONE survives.Oh, this also has Elle Macpherson which always goes in any movie’s favour.

I’m sure I will get a ton of abuse for this decision but I have to say that I prefer The Edge, simply because it isn’t as depressing as The Grey. Both movies are excellent though but The Edge is a bit more “fun”. The Grey is more emotionally engaging and has more depth but for sheer entertainment I’d pick The Edge.