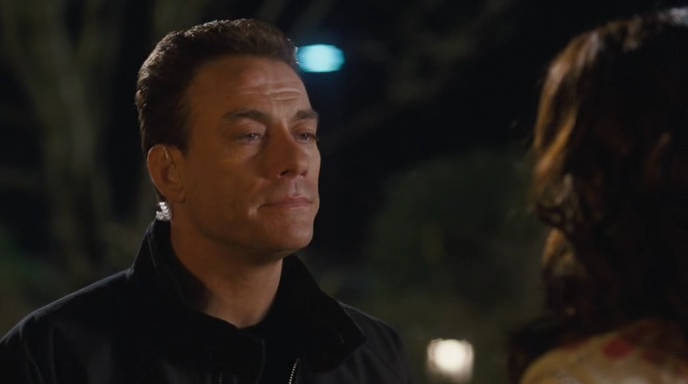 Revisiting The Hard Corps (2006) with JCVD

Plot: An Army veteran assembles a team of bodyguards to protect a former boxer. Complications arise when the boxer suspects his sister may be romantically involved with the head bodyguard (JCVD).

The Hard Corps doesn’t get talked about as much as Jean-Claude Van Damme’s other pictures but it’s still entertaining despite its shortcomings. It has an interesting story that’s a little different from the usual action movie fare as it has some forbidden romance as well as the usual fisticuffs.

Vivica A. Fox plays the love interest (and sister of Wayne Barclay) and her potential romance with Philippe (JCVD) is frowned upon by her brother immediately creating tension between the two men. Despite this Fox still manged to make Tamara Barclay sympathetic and one of the most likable characters in the film.

JCVD has been good at playing world weary characters with PTSD and a side order of self loathing for a while now but he does seem rather bored in this, lacking any real personality which I do miss from his golden era.

This being a straight to DVD movie the action is mostly low key fight scenes and a few shoot outs but the action highlight is the gym fight between Van Damme and Razaaq Adoti where the two men refuse to relent and have a rather epic one on one.

Wayne Barclay (Razaaq Adoti) isn’t a particularly relatable character and spends most of the movie resenting Philippe Sauvage for being there so if I were Philippe I’d have just left him but it would have been a very short movie otherwise.

The music is mostly hip-hop beats but nothing all that memorable although Razaaq Adoti apparently had a hand in writing the lyrics to the song The Hard Corps and also sings some of the vocals.

Sheldon Lettich directs but it’s amazing what you find out when scouring the internet. Interestingly enough, (according to IMDB) in an interview with Crave Online, Don ‘The Dragon’ Wilson claims he not only worked on and pitched the script with director Sheldon Lettich, but was also set to star. Wilson states that he had been searching for a producer to finance the film when he called Lettich months later and found out that not only had his role been recast with Jean-Claude Van Damme, but filming was nearly complete. Awkward…

It’s not exactly and adrenaline rush never really getting particularly exciting but the villain does feed people to his dogs which is nice and diabolical as any bad guy should be.

Overall, The Hard Corps isn’t an amazing movie and it’s somewhat forgettable but JCVD fans will find something to enjoy and as I said the fight scene in the gym is a highlight.