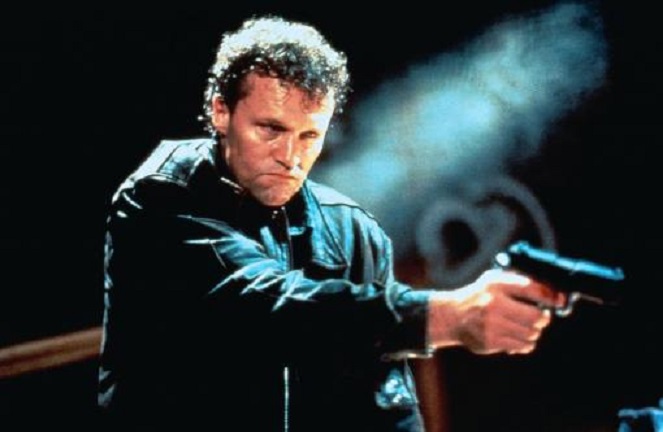 The Hard Truth has some entertaining moments, the cast give their all and the opening 15 minutes has some impressive action but it gets a little dull after that aside from a few moments of nudity and brief action scenes.

Plot: A suspended cop and his girlfriend blackmail an electronics expert into helping them break into the safe of the girlfriend’s boss, a corrupt city councilman who’s on the local mob’s payroll.

Review: Michael Rooker, Eric Roberts and Lysette Anthony star in this action thriller which admittedly has more love scenes than action but it does have an awesome opening 15 minutes where Michael Rooker’s tough as nails cop is chasing down a crazed active shooter who is gunning people down at random.

It’s still a disturbing and visceral scene preparing you for an exciting and violence fueled actioner. Sadly that isn’t really the case because after that great opening the film gets a little duller and is more about Rooker, Roberts and Anthony’s love triangle as they plan on pulling off a heist on Lisa’s (Anthony) boss.

There are some borderline softcore sex scenes in this giving us plenty of nudity (which is always a plus) but we do get a shoot-out and a few chases too; nothing ever lives up to the opening scene but the characters are at least interesting as none of them are especially good people all out for themselves and we are never quite sure who to trust. Eric Roberts almost steals the movie as he isn’t playing a villain as such but a bit more complex character where we never know what he is planning. Rooker is well cast as Jonah who is the gruff and jaded cop out to make some money and get away from it all. Lysette Anthony’s character Lisa basically just sleeps with everyone and cannot be trusted at all.

The pacing really drags at times and there are too many love scenes which just get awkward after a while; like, can we move this along and start blowing things up, please?

It has a slinky saxophone and muted trumpet score which helps create the seedy and sexy atmosphere so it works for the film.

The Hard Truth ends really the only way it could for the characters as they all get what they deserve but maybe not what they wanted. The performances are generally solid with Roberts especially memorable and Rooker and Anthony regularly getting naked. I also should mention that is has a shouty police captain who is fed up with Rooker’s antics, etc which gives us a few laughs.

Overall, The Hard Truth has a few decent action scenes especially at the start ad Eric Roberts makes anything better but it’s not especially exciting and as the characters aren’t that likeable then it’s hard to root for them Still, it’s the kind of movie we rarely see anymore so it’s worth checking out once, maybe.