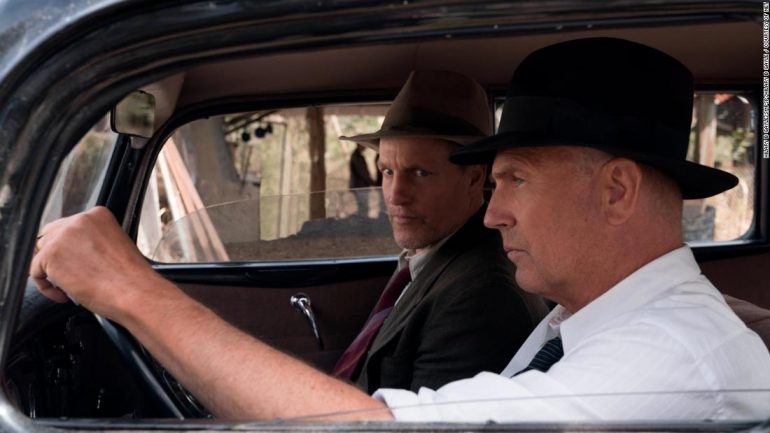 The Highwaymen may not be action-packed and it’s far too long but Costner and Harrelson are at their best and there are enough shoot-outs and fights to keep things interesting.

Plot: A pair of Texas Rangers come out of retirement to catch the infamous outlaws Bonnie and Clyde.

Review: This is really more of a crime drama than an all-out action flick but there are a few shoot-outs and chases to be worthy so here we are.

Kevin Costner and Woody Harrelson are two of my favourite actors so seeing them both on screen together was a good enough reason to check out The Highwaymen. I wasn’t all that familiar with the stories of Frank Hamer (Costner) and Maney Gault (Harrelson) or how they even took down Bonnie & Clyde so for this movie I was simply enjoying the ride and watching two screen legends trade acerbic banter at each other while trying to catch two of the deadliest killers in the USA.

The Highwaymen is not a fast paced film so let’s just get that out of the way right now; it is quite slow and the second half particularly feels overly drawn out taking away some of tension that had previously been built up. Aside from that though it was never dull and that’s mostly due to Costner and Harrelson who are at their magnetic best.

Costner’s Hamer is gruff and tough as nails but enjoying his retirement and essentially wants to keep his wife happy; when duty calls however, he has to rise to the occasion and she eventually understands that he has to go on the trail of Bonnie & Clyde.

Gault is unemployed and living in a rundown house (that is now owned by the bank) so he jumps at the chance to try and reclaim some of the old glory when he and Hamer were two of the toughest Texas Rangers around. Gault is a little more humane and sociable (he also enjoys a drink) whereas Hamer is all business and knows that when it all comes down to it they are going to have to kill Bonnie & Clyde.

This is essentially an American road movie with our two Rangers in hot pursuit of Bonnie & Clyde across the country and yet they always seem to be two steps behind them. The public worships the criminals as they see them as Robin Hood types who are sticking it to the man and stealing from banks rather than the people. They seem to miss the fact that the couple have killed numerous police officers along the way.

Bonnie & Clyde aren’t seen until the very end so The Highwaymen helps to keep up their mystique so this story is seen very much from the side of our Texas Rangers.

The Highwaymen shows the harsh times of the era as this was during the American Depression so we see people living in tents in back yards and more. Clearly a lot of research went into the project and it all looked historically accurate; whether the story is or not I couldn’t say but the majority of it appears to be.

There are moments of shocking violence, several shoot-outs and even a bathroom fight scene with Gault proving he’s still every bit the badass he once was. Despite the serious nature of the story there are still some hilarious one-liners and sharp dialogue so it keeps it all ticking along nicely. It’s also beautifully shot with a perfect music score which is never overly intrusive.

Overall, The Highwaymen may not be for everyone with its deliberate pacing and overlong runtime but it’s worth watching for the two leads firing on all cylinders, a juicy script and some violent shoot-outs.