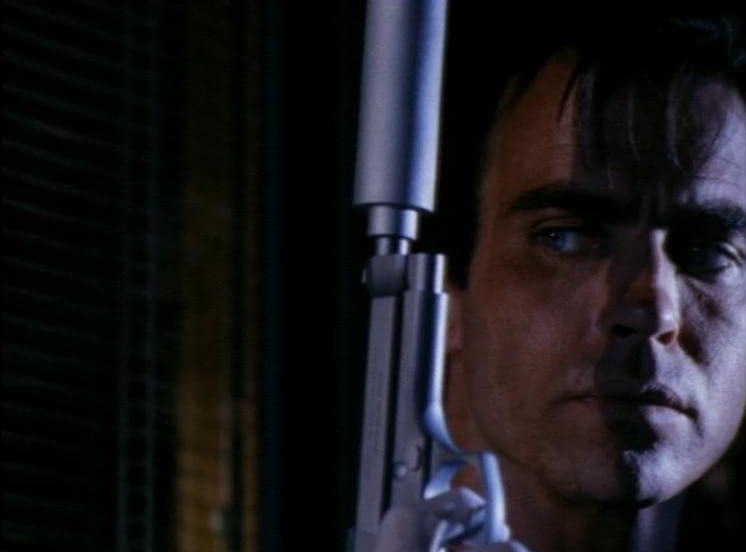 The Hit List is elevated by the great cast and a story which has enough twists to keep you watching. It doesn’t have too many action set-pieces but it has a few shoot-outs making it worth a watch.

Plot: Jeff Fahey stars as Charlie Pike, an elusive hitman who eliminates high powered criminals whom the law cannot touch. Yet all rules are broken when his mentor Peter Mayhew (James Coburn), a prominent attorney who heads a secret committee to wipe-out organized crime figures, requests that Pike help a beautiful family friend, Jordan. Pike is captivated by this mysterious woman and is surprisingly drawn into a deadly double-cross as unexpected events raise the ante and reveal a conspiracy of dangerous dimensions.

Review: I had never seen this before but if a movie has Jeff Fahey in the lead it’s a sure bet that I’m going to enjoy it as he remains one of my favourite underappreciated actors. The Hit List is a bit of a forgotten gem that stars Fahey, Hard Target’s Yancy Butler and the legendary James Coburn.

There is something endlessly appealing about the hitman genre and this is one of the better efforts; the performances are solid from all three leads and the story has enough twists to keep you engaged.

James Coburn had one of the most iconic voices in cinema and he can class any picture up even if his role in this isn’t all that exciting. Yancy Butler has some nice chemistry with Fahey and I can see why she would have liked the role of Jordan as she is unpredictable.

It isn’t packed with action but it has a few shot-outs and there is some nice squib work. It’s obvious who the real bad guy is early on but it’s the characters that keep this an engaging 93 minutes.

Fahey is well cast is the ice-cold hitman Charlie Pike with his steely blue eyes and ruthlessness with his prey but when he meets Jordan Henning the pair fall for each other… but is Jordan everything she seems?

We need to talk about how stylish and huge Charlie’s apartment is so it’s good to see that professional killers can still earn a decent salary.

The Hit List has a slinky saxophone score which is the kind of music we just don’t get anymore; when was the last time there was saxophone on a music score; anyone know? Anyway, it works for this tale of love and bullets.

It has a rather downbeat ending not really leaving you with much but it’s hard to see how the story could have ended any differently so it felt right.

Overall, there isn’t much else to say; The Hit List is an enjoyable hitman tale which doesn’t have a ton of action but Jeff Fahey is as endlessly cool as always and the supporting cast is impressive making this worth checking out. It’s on Amazon Prime if you’re interested.