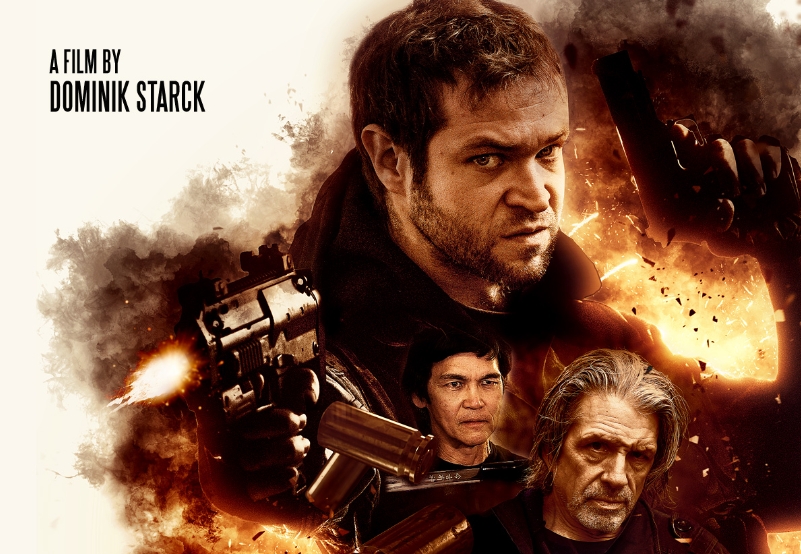 The independent action thriller production THE HITMAN AGENCY, about competing hitmen in a web of conspiracies by writer/director Dominik Starck, just hit VOD with a release on Amazon Instant Video.
Shot with an international cast – including 11 time kickboxing champion Don ‘The Dragon’ Wilson – and just a fistful of euros, this underdog-production with compelling storytelling also makes its film market debut in Cannes looking for further worldwide distribution. Starck, a writer and producer on the “Krautsploitation” action film ATOMIC EDEN, starring Fred ‘The Hammer’ Williamson and Lorenzo Lamas, delivers his action thriller for fans of martial arts, multi-layered stories, and self-financed independent genre films to audiences worldwide and even before the movie’s premier in his home country Germany.

“Making an indie film is close to being a hitman; choose your goal, aim and go after it no matter the obstacles. And like assassinations, it’s a hit and miss with movies. I consider our movie the latter but it’s up to the target audience to decide if that’s the truth or not,” says Starck, the writer/director. While the German independent production by Starck Entertainment and R.J. Nier Films is represented by distributor Generation X Group GmbH at the film market in Cannes (May 8th to 17th) for international sales, the US audience is the first to be able to watch THE HITMAN AGENCY on Amazon.com where it’s available for rent and buy.

The movie is the directorial debut of writer/producer Dominik Starck who previously worked on the award winning mercenary action film ATOMIC EDEN, starring Blaxploitation legend Fred ‘The Hammer’ Williamson and Lorenzo Lamas (RENEGADE). While being a deliberately different type of movie, THE HITMAN AGENCY features a special appearance by 11 time kickboxing champion Don ‘The Dragon’ Wilson from BLOODFIST-fame. Starring American-born Erik Hansen (THE COUNTESS) and LA-based Everett Ray Aponte (ATOMIC EDEN) as competing hitmen from different ends of their assassin-careers, THE HITMAN AGENCY is a character-driven conspiracy-thriller with twists and turns, spiced with some martial arts outbreaks and assassinations. Shot on locations in Germany in English with more blood, sweat, and tears than a real budget, this underdog movie is proof to the phrase that nothing can stop you from making a movie when you really want it. Not even in Germany where there’s no platform for genre films at all.

LOGLINE: Professional hitman Lucas Kane uncovers the corruption of his own agency by interrogating the greatest hitman who ever lived.

SYNOPSIS: The ambitious professional hitman Lucas Kane (EVERETT RAY APONTE) hunts and tortures his old predecessor Joseph Kyler (ERIK HANSEN) in the basement of his European home to retrieve incriminating evidence about their mutual contractors. Lucas keeps interrogating the retired assassin with a big target mark on his head only to reveal the lies and corruption of the international hitman agency by taking a journey through the manipulations of the old man’s past.

DIRECTOR’S STATEMENT: “I like unpredictable movies. Unfortunately, most movies nowadays tent to repeat genre tropes or use the most common ground to satisfy its wide audience. As an audience member I don’t want to know how the movie ends ten minutes in. And, consequently, as a storyteller I don’t want to insult my audience by going the obvious way. THE HITMAN AGENCY centers around questions like, can you do a wrong thing for the right reasons or is it the right thing for the wrong reason, in reality? If you’re doing the right thing for the wrong reasons isn’t the right thing wrong by its nature? Like a character puts into words throughout the movie, decisions are based on personal experience but if your experiences are false and your life changing information fake news then your decisions are doomed to be terrible mistakes. Take that dilemma to the world of professional assassinations and you’re in big trouble. This movie was born from the intimate play of two competing, deadly men in one room without going the obvious route of torture and violence. As a film maker I consider myself a storyteller first and foremost. So, when I trap two hitmen in a room, the way they deal with each other is not through physical threats but through stories. If your whole life is a lie who can you trust? In the end; life is the biggest killer of them all! Another key point is the confrontation of old versus young, experience versus technology. It took our protagonist, now in his 60’s, half a lifetime to realize the point of his life, but is it too late now or will he be able to play his cards against all odds? In the end, it’s also a love story. The hero’s journey took our Joe Everybody to a place he hoped to find some love, but it ended in a tragedy. It wasn’t romantic love like we picture it, but it was the thing closest to that to a young man on the edge. He turned to the dark side as it happened to other tragic cinema heroes (think Darth Vader in STAR WARS) but there might be redemption somewhere down the road. Even if that means to cause even more wrongs. A story that was intended to be two men, a chair and a room expanded during the development process and all of a sudden I ended up having a hitman’s biopic at my disposal. For running time and budget reasons I had to condense that back into a reasonable amount of flashback storytelling in a very HIGHLANDER-way. Yet, all the elements from modern classic hitman-movies that inspired me for years are there: the mentorship aspects of Luc Besson’s LÉON: THE PROFESSIONAL, the conspiracy themes and the methodic work ethics shown in Richard Donner’s ASSASSINS and even a dash of romance and humor that was infused by the romantic hitman comedy GROSSE POINT BLANK, starring an outstanding John Cusack. And yet, THE HITMAN AGENCY goes even further back to all the FRANKENSTEIN adaptations; a misguided, deadly creature of a sinister agency dealing lives for a living that turns on its creator is at the very heart of THE HITMAN AGENCY. To me, this movie is not as much about its budget restrictions (or the fact that genre films are not considered to get state funding in Germany) but interwoven complex characters and the need for redemption. If necessary at any cost.”

THE HITMAN AGENCY is now available to rent and buy at Amazon.com.