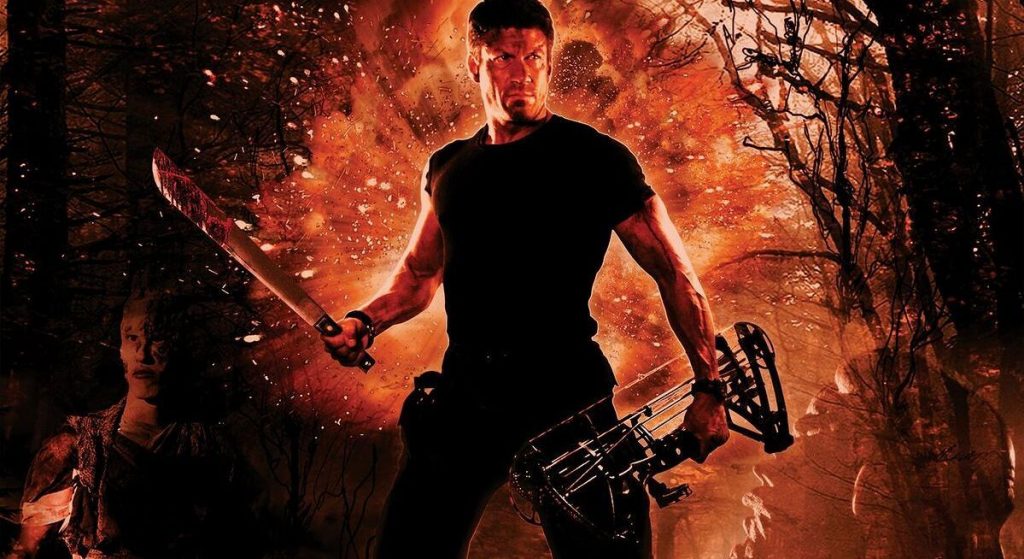 The Horde brings plenty of hard R violence and some parts will be tough to watch for some, but the payoff as Crenshaw takes brutal revenge on the bad guys is worth it and this is a movie I’ll be returning to for sure.

Plot: The film follows John Crenshaw as he accompanies his girlfriend and her students on a weekend nature-photography expedition deep into the woods. What should be an educational and fun-filled weekend turns into horror as the group is besieged by an unspeakable evil – a horde of hideously disfigured, mutated humans with an insatiable taste for blood. As things go from bad to worse, Crenshaw becomes their only hope if they are going to get out alive.

Review: I was talking with someone recently about the lack of American old-school action stars coming up in the business today but ladies and gents we have found him: Paul Logan is practically carved out of stone and The Horde gives us the badass hero we’ve been looking for. It’s a cross between Rambo and The Hills Have Eyes, feeling familiar yet fresh at the same time.

The first half of the movie is more like a slasher flick and builds up the tension while introducing us to our cast of victims… I mean characters.  The middle of the movie goes into some pretty nasty gore; I like to consider myself a pretty sick guy but even I found some of this movie disturbing and I thought what was done to some of the women was especially cruel and tough to watch.

The character of Riley felt unrealistically annoying but you just knew that was so you wouldn’t feel bad for him when some really, really awful stuff happens to him.

After that the movie turns on its head and becomes like Rambo (2008) as our hero John Crenshaw (Logan) uses his Navy SEAL skills to bring the pain to these sadistic mutant freaks. He’s just as brutal to them stabbing, stomping and burning his way through The Horde and the final half hour is action movie heaven. You want a bodycount and a badass action hero? You got it! His weapon of choice? A bow and arrow!

It has a pretty awesome supporting cast too including Vernon Wells (Commando) and Bill Molesley (The Devil’s Rejects) with Costas Mandylor ever reliable as the main villain; we also get a nice cameo from a certain Legend of  Action but I won’t spoil it.

Budget restraints sadly mean CG explosions in parts but they actually weren’t that bad and I was so caught up with it all that it didn’t bother me.

We’ve got an awesome electric guitar flavoured score which gets truly epic any time Crenshaw does something cool (which is a lot). Logan really has the presence of a true action star and his is a career I’ll be watching with great interest.

Overall, The Horde brings plenty of hard R violence and some parts will be tough to watch for some, but the payoff as Crenshaw takes brutal revenge on the bad guys is worth it and this is a movie I’ll be returning to for sure.