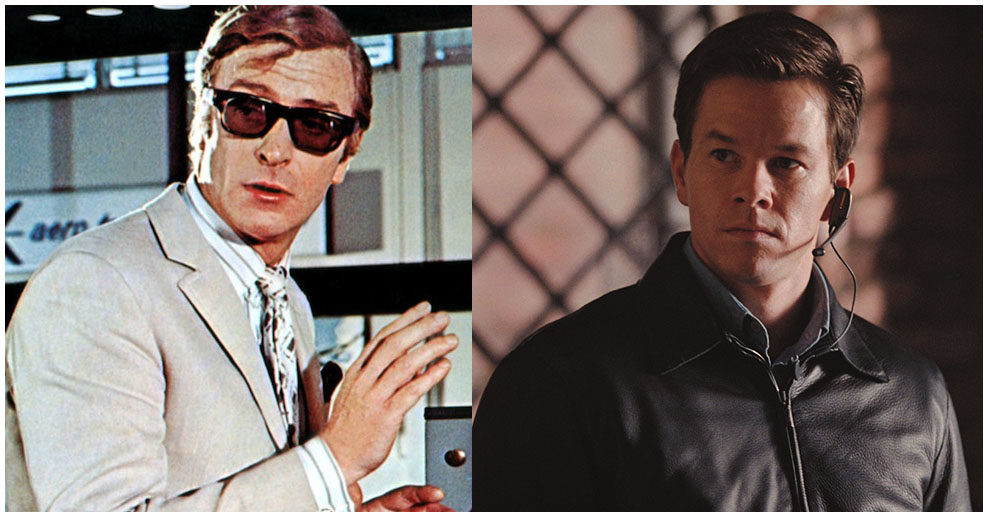 Today I thought I would revisit The Italian Job starring Michael Caine and compare it to the 2003 remake that starred Mark Wahlberg, Jason Statham and Charlize Theron.

So let’s take a look and see which is better…

Plot: Charlie is just out of the prison when he learns about his friends’ failed attempt at carrying out a heist in Italy. Now with the Mafia close on his heels, he intends to carry out the job himself.

This is one of Michael Caine’s finest hours and really is the true inspiration for the Austin Powers films. It has a wonderfully lighthearted tone throughout with larger than life characters that make it feel so quintessentially British. Aside from Caine (who is at his charming best) the cast also includes Benny Hill as the hilarious Professor Peach (who enjoys the company of large women), Noël Coward as Mr. Bridger and Dad’s Army star John Le Mesurier who shows up briefly as The Governor.

We need to mention how awesome Michael Caine’s wardrobe is in this movie as he really was the epitome of cool and is one of my favourite aspects of the entire thing.

I love a good heist caper and The Italian Job is one of the all-time greats with the iconic Mini Coopers used to complete the robbery of gold in Turin, Italy. The planning of the job itself grabs you from the start but there are so many classic lines of dialogue like “you’re only meant to blow the bloody doors off!” and “Hang on a minute lads, I’ve got a great idea” that it’s hard not to quote it all while watching.

There are explosions and chases throughout and the final escape from Turin will have you glued; I’ve always loved the ambiguous ending which was very much of the time and I like how it leaves you hanging (pardon the pun).

The music is perfect with the smooth opening song On Days Like These which lulls you into a false sense of security and then of course The Self Preservation Society is used during the escape and has a real sense of fun to it.

I never knew this before, but I was reading on IMDB that “the BMC (British Motor Corp.), the owners of the Mini, refused to donate any cars for this movie. The chief of Fiat Motors, however, offered to donate all of the cars needed, including Fiat 500s in place of the Minis. Director Peter Collinson, however, decided that, as it was a very British movie, it should be British Minis. Fiat’s boss still donated scores of cars for filming, as well as the factory grounds, and even though the authorities refused to close the roads, the Italian Mafia stepped in and shut whole sections of Turin down for filming, so the traffic jams in this movie are real, as are people’s actions during it.”

At just under an hour and 40 minutes The Italian Job is well paced and the characters, sharp dialogue and fantastic stunts still hold up. Yes, it’s a product of the time period but that’s the charm and Michael Caine’s Charlie Croker is one of his best characters to date.

I remember hearing when they announced a remake of The Italian Job it sounded like blasphemy however, after viewing the movie it was a pleasant surprise and really is a remake in name only. It has several references to the original which is even on a television for a brisk moment in the background in Steve’s (Edward Norton) house. We get the Mini’s again and it also uses a few character names but most of them are new to freshen things up for a modern audience.

This is very much an Americanised version with a glossy sheen and impressive cast that includes Mark Wahlberg, Charlize Theron, Edward Norton, Mos Def, Seth Green, Donald Sutherland and of course Jason Statham. Wahlberg takes over the role of Charlie and in no way captures the charm of Caine but he is a very different personality (or lack there of) where the story and characters take place in a contemporary setting.

I would have preferred to see Statham as Charlie but instead he plays the scene-stealing Handsome Rob who has a way with the ladies and once again feels more like the original character played by Caine.

Wahlberg’s Charlie is so bland that he makes little impact so it’s a good thing the supporting cast are as good as they are. Charlize plays Stella Bridger, daughter of John Bridger (Donald Sutherland) who was betrayed and killed by Steve early on in the story. Charlie and his crew are left for dead but a year later they reappear and vow revenge on the man who took everything from them. Stella wants to destroy Steve for taking her father from her so she and Charlie have common goals.

A lot of the time I can’t really be bothered with remakes but for The Italian Job I’ll admit this is the way to do it right; there is more going on in this story and you could argue that as an action movie this is superior as it is very well paced with fantastic stunts and regular action to keep things moving.

There are several clever moments and it must have been a logistical nightmare to film in L.A. but it makes the traffic jam scenes look authentic (and stressful).

The original didn’t really have a villain so Edward Norton is a welcome addition as Steve who is truly hateful and you can’t wait to see him get his comeuppance. Seth Green is well cast as likeable nerd Lyle and Mos Def provides some funny moments too, especially when he meets Skinny Pete for the first time.

The music is fine but there is nothing that makes any real impact and I couldn’t quote a single line of dialogue… although it has its moments.

The Italian Job remake is the sort of Hollywood blockbuster we’ve come to expect but it is still an entertaining diversion with a great cast and impressive action scenes.

Although I think the 2003 remake is arguably the better action movie but I have to go with the original starring Michael Caine as the characters are so much more entertaining, the dialogue is iconic and it never ceases to be wonderfully escapist fun.