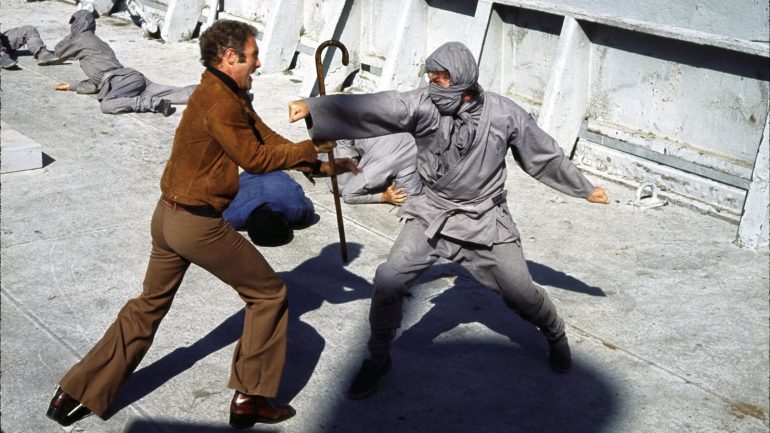 The Killer Elite deserves more love from people as James Caan and Robert Duvall are both perfectly cast, the action is well done and the finale features ninjas on a warship.

Plot: Friends George Hansen (Robert Duvall) and Mike Locken (James Caan) are hit men who do contract jobs for a company called Com-Teg, associated with the CIA. But, when George gets a better offer from the competition, he turns on Mike, breaking his elbow and shoulder. It takes Mike a long time and a lot of physical therapy to get back on the job, but he does — and coincidentally finds himself protecting a client whom Hansen and his gang are simultaneously being paid to assassinate.

Review: I’m having a bit of a James Caan tribute week here so first of all I wanted to look back at The Killer Elite; not to be confused with 2011s Killer Elite starring Jason Statham and Clive Owen, The Killer Elite stars James Caan and Robert Duvall (who reunite after The Godfather) as two hitmen becoming sworn enemies with Duvall’s Hansen turning on Locken (Caan) for a higher price.

Directed by the legendary Sam Peckinpah this movie is very important to me because it was the inspiration for the name of this very website. The Killer Elite didn’t get great reviews for some reason and hardly anyone talks about it anymore which is baffling as there are ninjas in it… I mean, what else do you need?

It could be argued that the first half is a little slow and perhaps too much time is spent on Mike healing from his injuries when you could tell that in a montage but I feel like it shows the struggle he goes through physically and mentally to get back on his feet and find Hansen.

The story isn’t predictable so just when you think you know where it’s going it does something else with various double crosses happening throughout.

Robert Duvall has a smaller role than expected but he is fantastic in every movie and makes for a menacing villain; I wish his payoff was a little more satisfying however, as soon as you bring ninjas into a film it is automatically great in my opinion.

James Caan is perfectly cast as Mike where he can at times be charming with the ladies but he’s every bit as ruthless as Hansen coming across as cold as ice. For some reason I had never noticed before that action movie regular George Cheung has an early role as Bruce. Other supporting cast members include Burt Young as Mac who helps out Locken but also acts as his conscience trying to convince him not be to obsessed with revenge. Then we have a nearly scene stealing turn from Bo Hopkins as Miller who some see as crazy but Locken knows he is just damn good at his job and he saves the day a few times.

Despite having a relatively slow first half I’ve never been bored watching this film as Caan and Duvall are just magnetic and when the action kicks in it’s well done, especially the street shoot-out and of course the finale with ninjas on a warship.

Overall, The Killer Elite deserves more love from people as both Caan and Duvall are at their tough guy best, there are some fantastic action scenes and did I mention that it has ninjas in it?