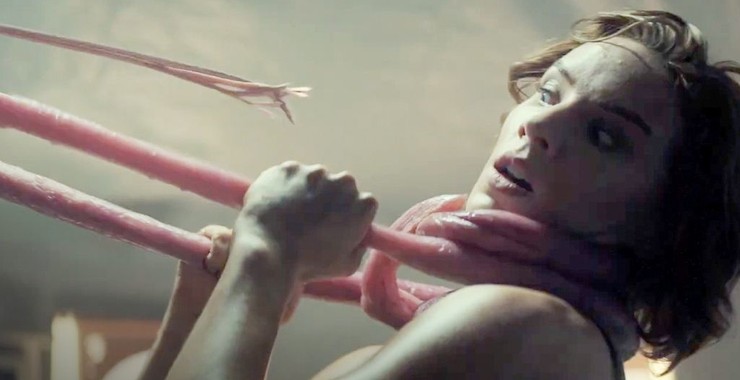 The Lair does nothing new or especially memorable but it has some decent kills and practical effects as well as plenty of action to be a diverting 90 minutes.

Plot: When Royal Air Force pilot Lt. Kate Sinclair is shot down over Afghanistan, she finds refuge in an abandoned underground bunker where deadly man-made biological weapons – half human, half alien – are awakened.

Review: It’s been a while since we’ve had a good action/horror flick and Neil Marshall is usually a safe pair of hands making movies like these having helmed The Descent and Dog Soldiers. The Lair is his latest foray into the genre and although it’s nothing we haven’t seen a bunch of times before it’s still a fun time with plenty of action, gory kills, corny dialogue and awesome practical creature effects.

The monsters actually look a little like Venom so I say give Marshall a shot at directing a Venom movie; it’s not like it could be much worse than the other ones we’ve had so far…

Anyway, I watched The Lair just the other day and I’ve already forgotten a lot about it as there isn’t much that sticks with you. The main thing was Jamie Bamber’s distracting accent and eye patch, which was the weakest element of the film. The characters were generally one-note, but our lead Sinclair (Charlotte Kirk) was sympathetic and immediately appealing so, she’s easy to root for.

The rest of the cast do their best but are really just fodder to be violently killed by these creatures and you will struggle to remember any of their names by the end credits. There are some wonderfully gruesome kills though with one guy getting his jaw ripped off being a particular highlight.

Overall, The Lair has every cliché in the book and there are plenty of other, better movies that tell the same story but it’s still a good time with some decent kills and plenty of action.