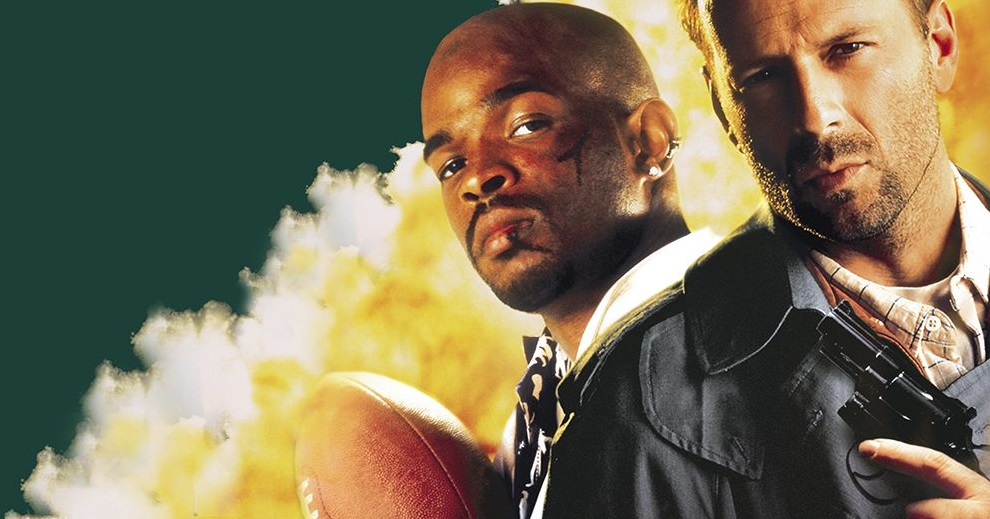 It’s no secret that The Last Boy Scout is one of Bruce Willis’ best films after Die Hard; his character Joe Hallenbeck is one of the coolest movie heroes of all time. He chain smokes, drinks and is generally a disheveled mess and yet you’re going to root for him every moment he is on screen because these were the golden days of BRUCE WILLIS: MOVIE STAR.

Hallenbeck is a down on his luck cynical detective who teams up with a fellow down and out ex-quarterback (Damon Wayans) to try and solve a murder case involving a pro football team and a politician.

Hallenbeck’s wife is also cheating on him with his best friend and he may or may not have fucked a squirrel to death last night so it’s safe to say he isn’t having the best day.

As awesome as the movie is however, the majority of the cast and crew hated working on it; apparently the stars Bruce Willis and Damon Wayans didn’t like working with each other. This was also the case with Damon Wayans on the recent Lethal Weapon TV series with his co-star Clayne Crawford who got the boot from the show so it has me wondering if perhaps Damon Wayans is also the one who may be hard to work with.

Interestingly enough Tony Scott even hated working with producer Joel Silver so much that he allegedly based the character Lee Donowitz, the asshole movie producer in his next movie True Romance on Silver and he made sure he looked and acted just like Silver did. I always thought he looked like Silver so it was fascinating to find that tidbit out.

To add insult to injury in a New Yorker profile, Joel Silver said that the making of this film was “one of the three worst experiences of my life.” Tony Scott also spoke about how miserable production was, largely because Silver and Bruce Willis took over the production, altered parts of Shane Black’s script, and made him shoot scenes he hated under threat of being fired and having to forfeit his salary. Then Composer Michael Kamen also hated the film when he first saw it. Allegedly the only reason he provided the score was out of his personal friendships with Bruce Willis and producer Joel Silver. That may explain why the score was rather bland and forgettable and certainly not one of his best.

So why did everyone hate working on the film so much? There was an overabundance of alpha males on that project,” said Assistant Director James Skotchdopole in an interview with The Telegraph. “Bruce was at the height of his stardom, so was Joel, so was Tony and so was Shane. There were a lot of people who had a lot of opinions about what to do. There were some heated, early-Nineties, testosterone charged personalities on the line. It was a ‘charged environment’, shall we say.”

In an interesting piece on IMDB it’s stated that Shane Black’s original script was very different from the final film. It had a darker tone with more violence, and almost the entire second half of the script was completely different. Besides many differences with the plot and characters, Black’s script also included more focus on the two main villains Milo and Shelly Marcone.

Milo, for example, was an even nastier villain than he is in the film. In the script, besides being a hit man for Marcone, he also had a job as director of snuff films in which his men would kill kidnapped women in very violent ways. There was also a scene in the script where he brutally kills an entire family who accidentally showed up near the place where a meeting between his and Baynard’s men took place.

Other parts that were changed include: a big boat chase scene with Joe and Jimmy trying to escape from Milo and his men chasing them through the fog until their boat and helicopter crash into each other, a shootout and fight scene between Joe and Marcone’s men in Joe’s house, another shootout in Marcone’s mansion in which Joe sneaks in after killing several guards, Joe and Jimmy saving Joe’s wife Sarah from being killed with a chainsaw in one of Milo’s snuff films, and different final showdown between Joe and Milo which took place outside Joe’ office and after he chases and tries to shoot Joe while on foot, Milo gets killed by Sarah who shoots him with Joe’s gun. 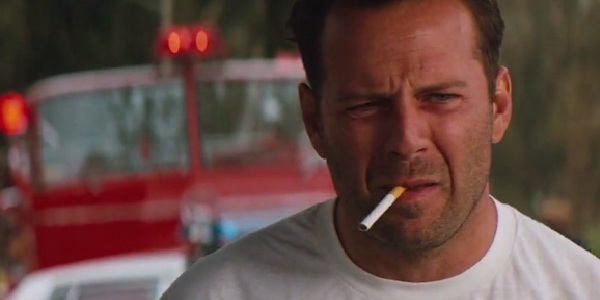 Besides all of these behind the scenes nightmares it’s incredible that the movie turned out as well as it did. Shane Black’s script may not have been what he wanted but it worked perfectly; the buddy banter between Willis and Damon Wayans is hilarious and yet both of these men are down on their luck through their own decisions, so they end up feeling pretty sorry for themselves which only adds to the characters.

The dark tone put off a lot of critics and viewers at the time so the film wasn’t a massive hit; Danielle Harris’ swearing seemed to bother quite a few people too due to her young age which could also have been a factor. Over the years the film has since grown into a cult classic though and rightly so.

The villain Milo, played by the late Taylor Negron was just a hateful and rather terrifying monster in this and I think if they had gone with Black’s original ideas the film could have been a sordid and unwatchable nightmare.

Despite all the changes and rewrites the story beats remain the same as the original screenplay; it is one of the more bizarre stories involving gambling, corruption and football but really it’s all just an excuse for violence, one-liners and Bruce Willis being cool.

To this day the opening scene remains incredibly shocking with Billy Blanks running on to a football field, shooting other players and then blowing his own brains out.

Although dark, the original script was even darker with Joe’s opening line being “You wanna be a detective? Here’s what you do: Take a trusted friend, and imagine the worst thing, the most despicable thing, the thing it would never even cross their minds to do. Then assume they’ve already done it twice.” That’s the spirit!

The dialogue is razor sharp with some amazing insults but I think the most iconic line is the “touch me again and I’ll kill ya!” scene which is just Bruce at his absolute best.

Keep your eyes open for an early role from Halle Berry who plays a soon to be murdered stripper who is also the girlfriend of Jimmy Dix (Wayans).

This is also set at Christmas (it is Shane Black after all) and introduced us to Satan Claus who deserves his own spin-off.

The Last Boy Scout may have been tough for the people who worked on it but it did at least work out well for us, the viewers as it gave us one of Bruce Willis’ most entertaining characters, some hilarious and offensive dialogue with a side order of graphic violence. Too bad we never got a sequel…