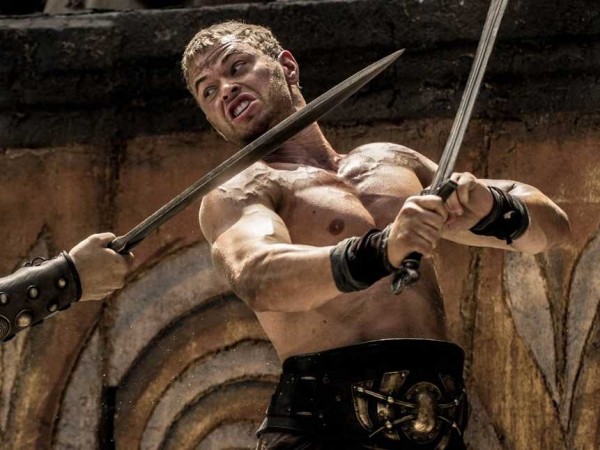 The Legend of Hercules isn’t the train-wreck I was expecting; with plenty of action, Scott Adkins on scene chewing form and a likeable lead in Kellan Lutz, I had fun with it.

Plot: The origin story of the the mythical Greek hero. Betrayed by his stepfather, the King, and exiled and sold into slavery because of a forbidden love, Hercules must use his formidable powers to fight his way back to his rightful kingdom.

Review: Sue Me! But I actually quite enjoyed this movie; I know everyone said it was appalling when it hit theatres but I’ve seen plenty of worse films than this. The Legend of Hercules is actually quite similar to Gladiator in terms of story and some of the set-pieces reminded of it too. Obviously it’s nowhere near the realms of greatness that Gladiator was, but there was still a lot to enjoy.

There was plenty of action and it was nicely shot so no shaky cam here; it felt a little like 300 in terms of style; lots of slo-mo and people jumping through the air with weapons, etc. Then I remember this is directed by Renny Harlin, director of Cliffhanger, Die Hard 2 and The Long Kiss Goodnight so he’s no stranger to action.

It was well paced and although some of the acting is a little wooden, I liked Kellan Lutz and think he would be a decent action star. Hey, we need SOMEONE to take over and Lutz has the look to do it; I also enjoyed Java Heat from last year so I say give him a shot. I’m personally glad he is in The Expendables 3 and will be intrigued to see what he’s like in it.

Scott Adkins chews the scenery as the villainous King Amphitryon who is a bit of a tyrant; he has a great sword fight with Lutz at the end and a small scene at the beginning but sadly that is pretty much it in terms of Adkins-flavoured action. There isn’t any martial arts from him but he’s clearly having a blast playing the villain, which he’s always been rather good at.

Is it cheesy? And how! But I love these kinds of swords and sandals movies and I couldn’t help but get swept up in it. The special effects were decent and when Zeus fires lightning at Hercules’ sword, turning into a whip? That was just plain cool.

Tuomas Kantelinen provides a suitably epic score which has some nice choral moments and a memorable theme tune too.

It’s not without its flaws though; the scenes between Hercules and Hebe (Gaia Weiss) are blush inducingly lame and some of the line delivery isn’t the best. It also feels like several other movies and really isn’t anything you haven’t seen before.

Overall, The Legend of Hercules isn’t the train-wreck I was expecting; with plenty of action, Scott Adkins on scene chewing form and a likeable lead in Kellan Lutz, I had fun with it.