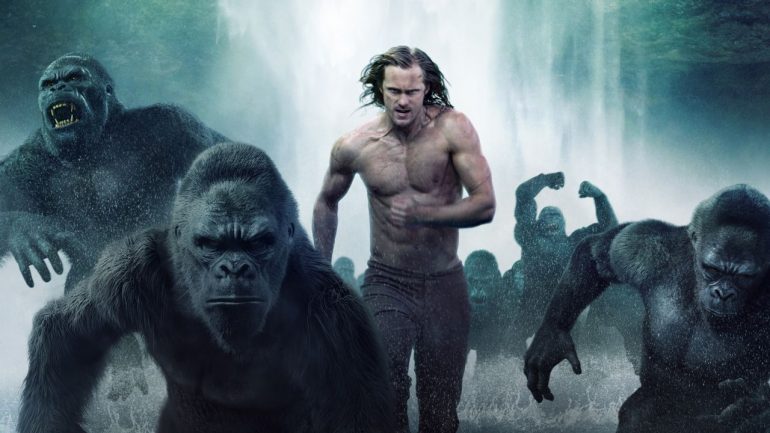 The Legend of Tarzan is quite ponderous in parts and not without its flaws but the final half has some thrilling action and it’s worth a watch.

Plot: It’s been nearly a decade since Tarzan (Alexander Skarsgård), also known as John Clayton III, left Africa to live in Victorian England with his wife Jane. Danger lurks on the horizon as Leon Rom (Christoph Waltz), a treacherous envoy for King Leopold, devises a scheme that lures the couple to the Congo. Rom plans to capture Tarzan and deliver him to an old enemy in exchange for diamonds. When Jane becomes a pawn in his devious plot, Tarzan must return to the jungle to save the woman he loves.

Review: I finally got around to seeing this the other day; I hadn’t been in a massive rush as the trailers didn’t exactly grab me but The Legend of Tarzan was actually a bit better than I expected. The first half of the movie is incredibly slow and verges on boring with far too much talking and fails to built up any real excitement. There is also an over-reliance on CGI which isn’t necessary for a lot of the time and for the most part isn’t all that great. I understand we’ll get the CG gorillas, etc. and that’s fine but do we really need CG landscapes? So much looked like it was done in front of a green screen which just felt lazy to me; there were a few real-life vistas which looked great and it would have been nice to see more of them.

Although I’m jealous of Alexander Skarsgård’s abs he wasn’t all that charismatic as Tarzan which is a shame as he’s fine actor; he must get to work out a lot in the jungle and keep a good diet to keep those abs up, so well played Tarzan.

Samuel L. Jackson is… well Samuel L. Jackson and he was a lot of fun but I find Christoph Waltz is in danger of becoming a one note villain. He should maybe stay away from playing the bad guy for a while as I’m already getting bored of seeing the same kind of character as we all know he is capable of so much more. Also, didn’t they just totally lift a scene from Raiders of the Lost Ark when Marion is having dinner with Belloch (her captor) and tries to escape? That exact scene is in this which made things feel a bit too familiar.

Margot Robbie can be so different in every movie and if you compare her in Tarzan to Harley Quinn in Suicide Squad it’s night and day and proves what a versatile actress she is. I’ve heard a lot of people say they didn’t like her incarnation of Jane but I thought she was fine; she didn’t need to do much except wait to get rescued.

Tarzan feels like an old-fashioned adventure movie and when it kicks into gear in the second half it becomes a lot of fun; watching our hero swinging through the trees and hearing his famous battle-cry will always excite the 12 year old in me and if they decided to make a sequel then I would likely check it out.

The music is pretty much what you’d expect with some African sounding chants and it works well in creating the right mood; it gets suitably epic towards the end when the action kicks in too.

What I liked about the story is that it wasn’t a coming of age tale which we’ve seen so many times before before and frankly would have been too similar to this year’s live action Jungle Book. In this movie Tarzan is happily living in London with his wife Jane at the start and is reluctantly called back which was a nice change of direction.

A tip of the hat must also be given to the return of the epic bad guy death which gives the movie an extra half star to the rating; although you don’t see it, you can hear it and that’s good enough for a PG-13 movie.

Overall, The Legend of Tarzan is quite ponderous in parts and not without its flaws but the final half has some thrilling action and it’s worth a watch when it hits Netflix.