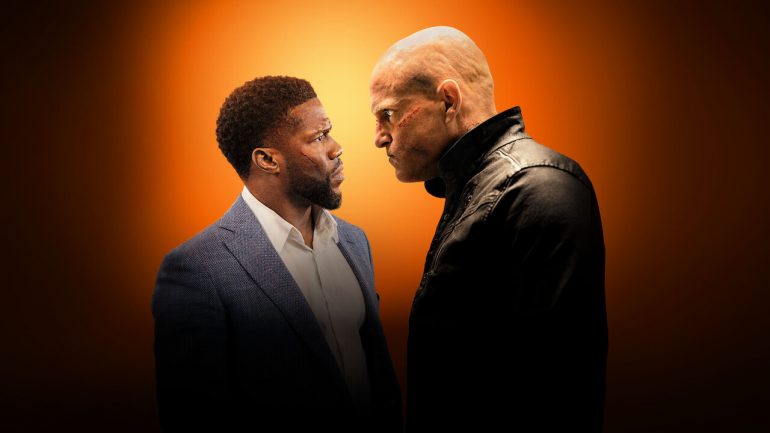 The Man from Toronto isn’t especially funny or original (severely lacking Toronto itself) and you will likely forget it exists by the time you reach the end credits. It’s inoffensive stuff but with the talent involved you’d expect a bit better than what we get.

Plot: A case of mistaken identity arises after a screw-up sales consultant and the world’s deadliest assassin—known only as The Man from Toronto—run into each other at a holiday rental.

Review: When The Man from Toronto was first announced I was excited to see Jason Statham filming an action comedy near me but when he dropped out to be replaced with Woody Harrelson my interest dipped a little. Don’t get me wrong, Harrelson is a fantastic actor, but I was hoping to see The Stath downtown and maybe try to finally get an interview with him; alas it was never meant to be and after watching the finished film it’s probably better that Statham stayed away.

The Man from Toronto isn’t terrible and has a few laughs with some impressive action set-pieces but nothing about it feels fresh or new with a script that isn’t as funny as it could be. Toronto itself isn’t really a big part of the film; I was hoping to see lots of familiar sights and although we do get a few scenes here the city itself doesn’t play a big role. I’m still waiting for a fight scene on the top of the CN Tower but we don’t get anything like that here.

To be honest I’m also not the biggest Kevin Hart fan; he’s alright but I don’t find him especially funny, and he just tends to play the same type of character in every film (admittedly so does Statham but we’ll gloss over that) so it’s no different here. Like I said, there are some entertaining moments but it’s mostly courtesy of Woody Harrelson who does the best with what he’s given.

Expendables 3/Hitman’s Bodyguard director Patrick Hughes shoots the action well with a couple of fun fights and the final 20 minutes is the obvious highlight but there aren’t any scenes that will really stand out; so this is your standard forgettable Netflix fare that you’ll likely never think about again after watching.

The Man from Toronto reminded me of another film where a normal guy who spends his days dreaming of a better life gets stuck with a hitman who shows him that he needs to take action rather than sit on the sidelines to make a real change to his life. At one point the normal guy has to pretend to be the hitman with his employer who he’s never met and it’s filled with tension. That movie is Collateral starring Tom Cruise and Jamie Foxx which you should watch instead of this as it’s better in every way.

Overall, The Man from Toronto is a fun distraction and harmless entertainment with a few decent action scenes but there are so many other better movies that do the same kind of thing so I’d recommend watching them instead.