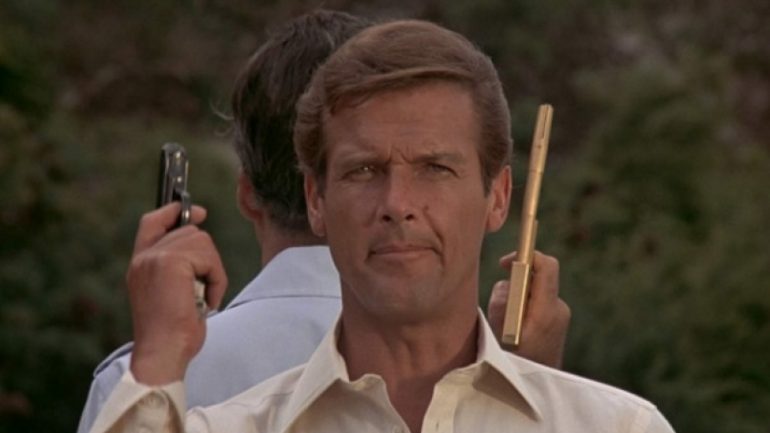 The Man With the Golden Gun is one of my fave Bond movies with Christopher Lee on classic form and Roger Moore at his brutal best.

Plot: Bond is led to believe that he is targeted by the world’s most expensive assassin and must hunt him down to stop him.

Review: This is not only one of Roger Moore’s best Bond movies, but one of my personal favourite Bond movies. Period. Christopher Lee is electrifying as Scaramanga and is one of the few Bond villains who is genuinely cool; he’s suave, sophisticated… and really enjoys killing people. He has no problem being ruthless and remains one of the best Bond villains of all time.

Roger Moore actually keeps the parody to a minimum with only a few choice one-liners, but the biggest shock is how nasty he is in this movie. The scene where he is slapping about the woman for information is pretty brutal and will make you feel rather uncomfortable.

Britt Ekland looks amazing in a bikini and we get to see plenty of her in it, in the second half of the movie.

John Barry provides the score which is classic Bond and very 70’s; twanging guitars and the Bond theme used regularly. I’m a big fan of the theme song by Lulu as well, the lyrics are just hilarious and it makes me laugh every time.

The midget henchman Nick-Nack creeped the hell out of me as a kid and is still super creepy today.

One of the things I liked about this movie is it’s rather low key and doesn’t have a bad guy building a laser, trying to destroy the world. Scaramanga is a man who just enjoys killing and is always looking for a true challenge. The opening scene is rather surreal and trippy; something really different from other Bond movies.

There is surprisingly a lot of martial arts in this movie, clearly cashing in on the popularity of the genre in the 70’s. There isn’t any large scale action and the film feels a bit more gritty, but still maintains a sense of fun.

Admittedly the script isn’t quite as sharp as it could be and the annoying, redneck Sheriff guy ruins the tone a little, but he’s hardly Jar Jar.

Overall, The Man With the Golden Gun is one of my fave Bond movies with Christopher Lee on classic form and Roger Moore at his brutal best.