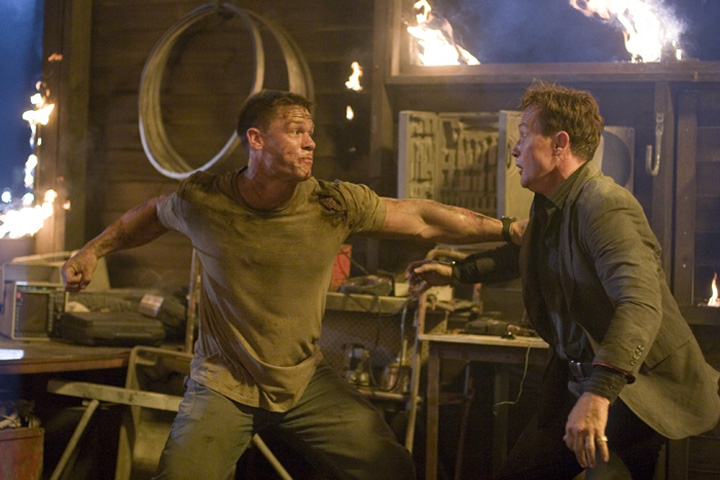 The Marine lacks anything approaching originality but has enough action to keep us action fans happy. Just don’t expect to remember it after 15 minutes.

Plot: A discharged soldier (John Cena) returns home from Iraq and finds that his wife (Kelly Carlson) has been kidnapped by the gang of a murderous jewel thief (Robert Patrick). Soldier John Triton must use all his military skills to rescue his wife from her ruthless captors.

Review: This movie gets a lot of hate from pretty much everyone, but I have always had a soft spot for it. It feels like a throwback to classic old-school actioners in the vein of Commando and delivers plenty of non-stop action.

Some of the acting isn’t that great and it’s not even remotely original, but plenty of asses are kicked and there are some pretty awesome explosions. That’s right folks, we don’t care about things like character development and such as that takes away too much from things going BOOM!

John Cena is an OK action star but he lacks the charisma of Arnie, Sly, et al so I don’t foresee him in an Expendables movie any time soon. As you’d expect Robert Patrick is the real standout in The Marine and even jokingly references his Terminator role. Yes, it’s very cheesy but it’s a lot of fun and another nod to classic action.

It is sadly a PG-13 movie and lacks the casual brutality of the true action classics from the 80’s, so there are no exploding heads or random decapitations, but there are numerous fist fights and impressive stunts.

Overall, The Marine lacks anything approaching originality but has enough action to keep us genre fans happy. It feels like the classic actioners of old but is let down by the PG-13 rating so it can’t go all out.